Today, Sunday January 9,The Center for Economic and Policy Research (CEPR) has released a report of its independent recount of vote tally sheets from Haiti’s November 28 election. CEPR supports claims from candidates, the Haitian press, and other observers that the election was plagued by fraud.The election is so fatally flawed as to nullify any possible attempt by “professional observers to certify the election results,” said Mark Weisbrot, CEPR co-director and co-author of the report.

“The amount of votes not counted or counted wrong in this election is huge – much larger than has been reported by either the Organization of American States (OAS) or the Provisional Electoral Council (CEP),” Weisbrot said in a press release. 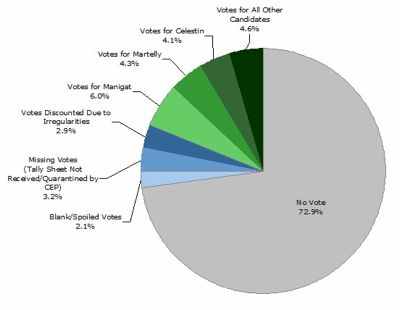 The OAS technical mission, at the request of the Haitian government, is currently conducting a re-count of the tally sheets. OAS is scheduled to release its own report at any moment, and it is expected that the results will mirror those of the CEPR, but not reach as deeply into irregularities and outright fraud. The OAS results are highly anticipated in Haiti. 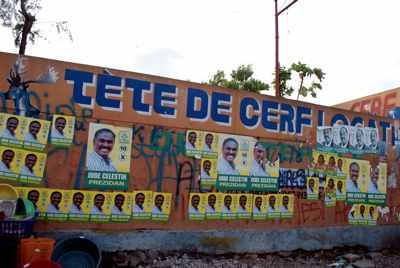 This was in spite of polling and leaked results that indicated a surprise in which Preval’s choice, Jude Celestin, had been reduced to third place behind Manigat and Martelly. This was a potentially spectacular overturn of a campaign that, according to observers, had used every trick in the book to ensure that Celestin won the election. The National Election Council (CNO), a watchdog group financed by the European Union, supported the presumed popularity of Manigat and Martelly in preliminary estimates.

It was this estimate that prompted a response from the US Embassy, expressing “concern” about the outcome.

According to CEPR findings, the participation rate of the electorate was very low. This is understandable, since there were threats of violence before the election, and 1.5 million Haitians are still in internal displacement (IDP) camps after the January 2010 earthquake. Only 22.9 % of registered voters had their vote counted. As a comparison, the 2006 presidential elections had a participation rate of 59.3 %.

“The greatest flaws in the electoral process occurred before election day: the banning of over a dozen political parties from the ballot (including the most popular party), and the ‘gargantuan task’ of attempting to register 1.5 million internally displaced persons – a task that clearly was a resounding failure,” the CEPR report says.

If it matters in the end, CEPR’s tally indicates Manigat leads with 6 % of registered voters, followed by Martelly at 4.3%, and Celestin with 4.1 %. In contrast, the Haitian Electoral Council (CEP) numbers for Manigat, Celestin and Martelly, which seemed to indicate widespread popularity, do not take into account that more than 70 % of registered voters did not vote. This is hardly representative of the will of the Haitian people.

It will be interesting to see how the imminent and widely anticipated OAS report, which was commissioned by the Preval government, will address this critical issue.

Not counting burned ballots, stuffed boxes or other outright fraud, there are more than enough “irregularities” to wonder how this can be rectified. CEPR found that 300,000 votes, or over 24 percent of total votes were questionable and had to be thrown out.

Where is the State Department now?

In a press briefing Friday, Cheryl Mills, Counselor to Secretary of State Hillary Clinton, responded to a question regarding the OAS certification process, said she really did not know “what we (US) would do.”

I mean, obviously, if the OAS mission concludes, that cancellation or redo or any of those things are steps that need to be considered, we obviously would be interested to understand how they came to those conclusions, would want to review whether or not those conclusions were one that we thought we too could support, and then would also step through what engagement that would mean is appropriate from us, whether that is engagement in supporting new elections, whether or not that is engagement in supporting whatever are the results. All of those are things we would be prepared to entertain, but I wouldn’t be able to tell you what we would do, obviously, because until we know what they conclude and how they conclude it, we’re not in the best position to be able to (inaudible).

Over the weekend the State Department issued a “fact sheet” stating “The U.S. government, through the U.S. Agency for International Development, contributed $14.5 million in election support to the electoral process.”

This included the procurement of elections material, including ballots and ballot boxes through a $5 million contribution to the UNDP-managed elections trust fund; technical assistance to political parties participating in the 2010-11 elections in the areas of poll watching, candidate debates, and election dispute resolution; and support to both domestic and international electoral observation.

$14.5 million in “election” support to an election that is fatally flawed. Haiti is the size of the state of Maryland and that comparison makes one wonder, “Where did the money go?”

Today, we asked co-author of the CEPR report Mark Weisbrot for a final comment on the exclusion of over a dozen political parties from the election — including Haiti’s most popular political party, Fanmi Lavalas.  The ban on  Fanmi Lavalas was analogous to excluding the Democratic or Republican party in the United States.

“It’s clear that they rushed this election, and excluded these political parties for the same reason: the international community wants to control who runs Haiti.”

It’s beginning to look that way, if you haven’t noticed already.

Note:CEPR was co-founded by economists Dean Baker and Mark Weisbrot. Its Advisory Board includes Nobel Laureate economists Robert Solow and Joseph Stiglitz; Janet Gornick, Professor at the CUNY Graduate School and Director of the Luxembourg Income Study; and Richard Freeman, Professor of Economics at Harvard University.