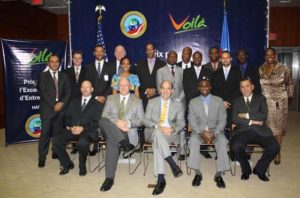 Haitian regulator Conseil National des Telecommunications (Conatel) has officially authorized Comcel, which operates under the Voila brand, to upgrade its existing GSM network with third-generation (3G) technology. An addendum to Comcel’s contract signed August 2005 gave it the right to upgrade to 3G ‘in accordance with the principles of equity , transparency and non discrimination’, reports local news site HaitiLibre. The formal authorization forms part of a package of measures adopted by the regulator to accompany the entry of new national fixed line, broadband and mobile licensee, Natcom (formerly Teleco), in order to ensure equal treatment of operators and maintain a competitive environment.

Comcel plans to invest USD40 million over three years to roll out and maintain a 3G mobile service in all ten departments of Haiti. Meanwhile, Natcom, managed by Vietnam’s Viettel, is in the process of rolling out a 2G/3G mobile network to compete with existing cellular providers Digicel, Comcel and Haitel.

1 thought on “There it is: Voila handed 3G permission”