Haitian citizens protested the UN presence in Haiti after the outbreak of cholera last October and widespread speculation that the UN camp in Mirebalais was the source of the disease.

After 150 years with no evidence of cholera in Haiti, more than 7,500 people died and more than 200,000 have been infected since last October.  The UN reports only 4,500 deaths, but fail to account for more remote areas and provinces where they have no reach.  Haitians have been concerned that the estimated $2 billion it will cost to treat the disease, which can easily be prevented, will fall on their government or will divert desperately needed funding from their earthquake reconstruction. 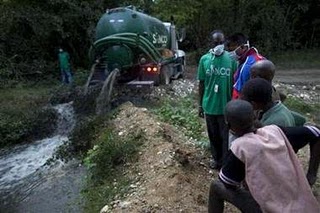 View Overall Haiti Cholera Epidemic
Map in a larger map
After months of outrage, the UN responded by finally appointing a four-member independent panel to investigate the source of the outbreak.  The panel issued its findings on May 4, 2011, and Secretary General Ban Ki Moon announced he would study the recommendations and convene a follow up task force, see: http://www.un.org/News/dh/infocus/haiti/UN-cholera-report-final.pdf
Essentially, the panel concluded that the South Asian strain of the disease had been introduced from abroad and traced it to the area of the Nepalese outpost.  The report described “faecal waste” as a possible source of the epidemic and said the “sanitation conditions at the Mirebalais … camp were not sufficient to prevent faecal contamination of the Meye tributary system of the Artibonite River”.  In fact, Al Jazeera cameras captured Nepalese soldiers furiously working to cover up latrines that went directly into the river the system .  But the panel did not directly accuse the Nepalese peacekeepers, saying the outbreak was “not the fault of, or deliberate action of, a group or individual”.  Instead it blamed a “confluence of circumstances” for spreading the disease.  The “explosive spread” of cholera was attributed to poor water and sanitary conditions in Haiti, widespread use of Artibonite waters, the migration of those infected and poorly serviced hospitals and clinics in the quake-struck country.  In other words, no one is to blame; and no single person can be held economically liable either. 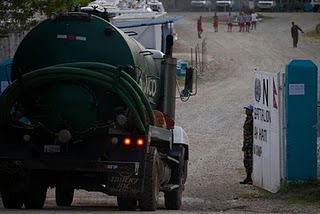 The fact is that the UN soldiers were never vaccinated or even screened for cholera despite a large force coming from Nepal that had suffered an outbreak just nine months before the soldiers were deployed to Haiti.  The UN also failed to monitor its sanitation contractors.  While it seems clear that the UN would like to avoid taking any blame for this situation, the fact is that their actions – and lack of actions – directly resulted in introducing cholera into a fragile and broken environment.  There was no way the UN was unaware that Haiti’s healthcare system could never absorb or manage an infectious disease outbreak.  They failed to take necessary precautions by screening troops and monitoring sanitation.
There UN report contradicts at least two other reports that make the direct connection to the Nepalese UN soldiers.  The French government issued a report linking the cholera epidemic to the Nepalese soldiers of the UN Mission MINUSTAH and claimed that Nepalese soldiers were infected.  The UN denied this report based on tests conducted by a Dominican contractor on the Nepalese soldiers working for MINUSTAH.  An investigative report conducted by AP found that the Dominican contractor was a specialist in obesity who had neither the experience nor credentials to test the Nepalese soldiers.  Furthermore, they say that the tests were never performed.
What is more frustrating for the Haitian people is that high profile people, such as Dr. Paul Farmer, who have been so personally and professionally committed to healthcare in Haiti have failed to weigh in on this serious issue and advocate for the Haitian people.  These people never fail to wade into Haiti’s complex domestic political situation with their personal views, but have nothing to say when thousands of Haitians are dying and the UN is denying clear involvement.
This is not the first time the UN has been involved in controversy and scandal in Haiti ranging from involvement in an alleged murder, to shooting at protestors, to sex scandals and to participation in corrupt oil deals and other business dealings.  The MINUSTAH mission has secured more than $4 billion since 2004 and has received another $864 million for 2011 despite few results and many scandals.  This mission needs to be held accountable for its actions, including the cholera, and should be more responsibly managed – or it needs to be closed.

3 thoughts on “The UN reports only 4,500 CHOLERA deaths, but fail to account for more remote areas and provinces where they have no reach”