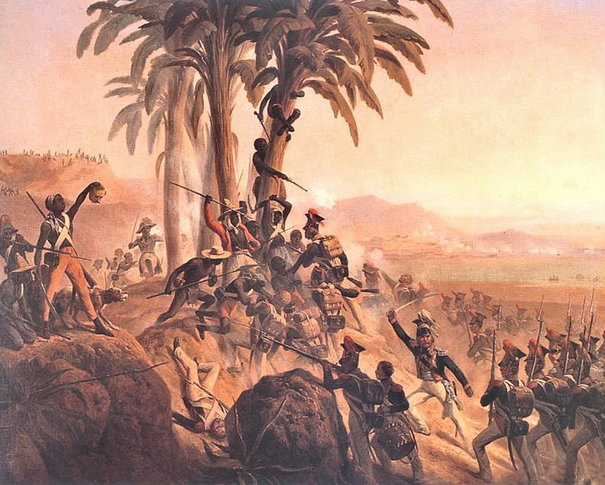 Historians regularly refer to the Haitian Revolution as the most prominent and successful slave rebellion against European imperialism ever in the Western Hemisphere.

Initiated on Aug. 14, 1791, by Boukman Dutty, an enslaved African “witch doctor” from Jamaica, in the town Bois Caïman in the French Caribbean colony/country/island Hispaniola aka Saint Dominique. He led tens of thousands of enslaved Africans from plantation to plantation, killing every Caucasian in sight and burning down each plantation.

“Boukman said, ‘Let’s get rid of the white man’s god, and pray to our own gods,’” revealed Professor Edward Scobie during his lecture, “The Haitian Revolution.”

“It was an African spirit that led them, and that’s what we need today,” said Scobie. “You have to go back to Africa in your mind!”

“It wasn’t one man,” stated Scobie. “It was a collective leadership.”

Although L’Ouverture is the individual most commonly associated with the Haitian Revolution, Dessalines was the uncompromising force who refused to assimilate, painted the land red with European blood and became independent Haiti’s first president.

“Dessalines said to Toussaint, ‘I am not here to play the white man’s games. I don’t keep prisoners of war. I chop their heads off,’” Scobie revealed. “‘Koupe tet boule kay!—Burn houses and chop off heads!’ was Dessalines war cry. It is that type of attitude that won the Haitian Revolution!”

L’Ouverture was deceived by the French and arrested. He died April 7, 1803, while imprisoned in France.

The bloody revolt lasted approximately a dozen years, culminating on Jan. 1, 1804, with the renaming of the peninsula/country as Haiti. Some estimates suggest that approximately 400,000 to 500,000 enslaved Africans participated in the upheaval, with 40,000 to 50,000 Caucasians being slaughtered.

Once regarded as the pearl of France, Haiti became the first sovereign African state in the Western Hemisphere, and only the second country to gain independence from its European colonizers—the United States being the first in 1776.

The Haitian Revolution struck so much fear in French dictator Napoleon Bonaparte that he sold the Louisiana Territory, which extended from the Gulf Coast to the Canadian border and from the Mississippi River to the Ricky Mountains, to the United States in what is known as the Louisiana Purchase in 1803. Some historians contend that had the sale not happened, France would’ve maintained its stronghold in the new world, and you’d be reading this in French instead of English.