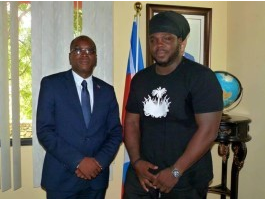 Edwing Charles, the Minister of Youth and Sports met the former World Heavyweight Champion of the World Boxing Council (WBC 2014-2015) the Canadian-Haitian Bermane Stiverne (40 years) native of the Plain (November 1, 1978).

Bermane Stiverne arrived on April 11 came to his homeland to help the leaders of the Haitian Amateur Boxing Federation, to detect and supervise talent in difficult areas, to establish partnerships to contribute to the qualification of Haitian boxers in the next Games of 2020.

In the presence of Pierre Eddy Daniel, the President of the Haitian Boxing Federation, Bermane Stiverne who is on his fourth visit to Haiti, discussed in particular :

Minister Charles appreciated the Bermane’ approach and said he was in favor of making him a goodwill ambassador for Haitian sport. Charles is convinced that Bermane Stiverne’s past and the fight he fought for a life of glory and pride can be a source of motivation and inspiration for our talented young people in difficult situations, saying “Regardless of a man’s past, if he decides to reorient his life and take concrete steps to get there, he can reach the highest heights.”