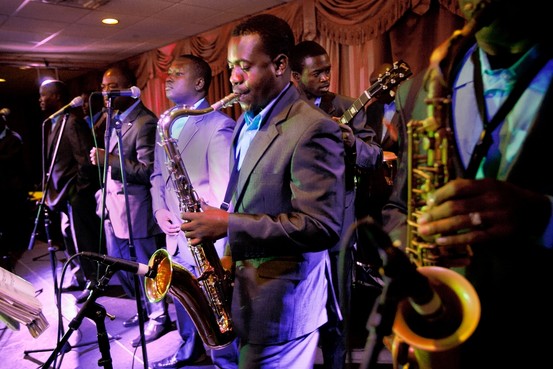 Deep in Brooklyn one recent night, hundreds of Haitian-Americans got a taste of their homeland as they shuffled to the blaring Latin rhythms of an iconic band and sipped the island’s famed Rhum Barbancourt.

Onstage were 18 gray-suited musicians with an unusual pedigree: They are the latest incarnation of Orchestre Septentrional, which has been making music since 1948 and is perhaps Haiti’s quintessential big band. Likened to El Gran Combo de Puerto Rico and Cuba’s Buena Vista Social Club for its longevity and its link to an earlier age, Septen, as it is affectionately called, is almost universally known in Haiti for its homespun tales set against voodoo imagery and imported musical styles.

“Musicians come and go. That is how an institution survives.” Nikol Levy, musical director

“They sing about class divisions, politics and love. They tell satirical stories about unusual people in the community,” said Pierre Joachim, director of CoSepten Inc., a nonprofit that owns and manages the group.

Despite its biannual visits to the New York area—where it will play three more shows this weekend—and other Haitian diaspora cities including Miami, Philadelphia, Chicago and Montreal, Septen has mustered little crossover appeal in its six decades of existence. But a new documentary, relatively new management, and a fresh lineup of young players could help change that—even if they alter the course of the band in ways that some of the veteran members are not especially comfortable with. 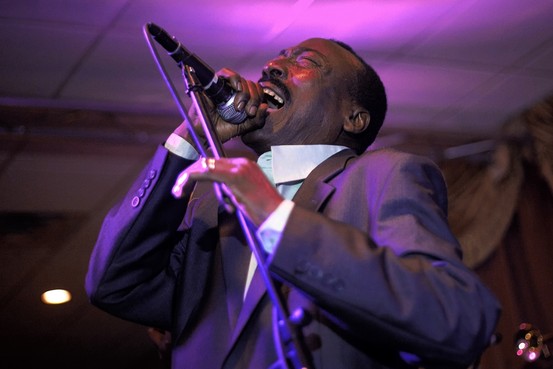 On Thursday, PBS will air “When the Drum Is Beating” (named for a popular Septen song, “Tambou Frappé”) as part of its Independent Lens series. The film weaves the band’s story with Haiti’s own tumultuous history, from French colony to independent black republic to a land devastated by the earthquake that claimed an estimated 200,000 lives in 2009.

The quake prompted director Whitney Dow to completely remake his film. “It got me thinking about 500 years of history of Columbus, slavery, thuggish leaders, dysfunction, natural disasters—all the things that set the condition for hundreds of thousands of people to die in a few minutes,” he said. “I wanted to give this broader context and present the band as a stand-in for the incredible spirit of the Haitian people.”

Septen was co-founded in 1948 in the northern city of Cap-Haitien by saxophonist Ulrich Pierre Louis at a time when most Haitian bands were playing music from neighboring Cuba and the Dominican Republic.

“They were the first band to sing about black Haitians in everyday life, like women selling mangos on the side of the road,” Mr. Dow said.

Mr. Pierre Louis, who died in 2009, aimed to professionalize the musician corps with a disciplined rehearsal schedule and uniforms, and he turned to local themes to “nationalize” a new musical style, as Mr. Dow put it. It was Mr. Pierre Louis who created Septen’s signature “boule de feu” (“ball of fire”) rhythmic style, which uses traditional voodoo rhythms found in the bass, congas and drums.

In the ensuing years Septen adapted to music styles springing up in Haiti, like Compa Direct, a slower form of Dominican merengue, and added emphasis to instruments like guitars and keyboards on top of the saxophones, trumpets and percussion sections. The band also borrowed from styles including reggae, bolero and calypso.

Septem has composed more than 300 of its own songs, including one that helped it survive Francois “Papa Doc” Duvalier’s dictatorship. When Duvalier put out word that he wanted a song made about him, Septen composer Alfred Moise created “Prezidan a Vi” or “President for Life” in creole.

By 2004, amid accusations that the band had become stodgy, it hired as its musical director Nikol Levy, a classically trained Haitian musician who had been living in New York and France before returning to his hometown of Cap-Haitien. Mr. Levy set about replacing most of the older members with younger musicians trained in jazz, blues and other modern music forms. He said in an interview that he aimed to make music that could be listened to, not just danced to, expanding the group’s tours to reach non-Haitian audiences.

But Mr. Levy’s new direction sparked tensions with the old guard—particularly Michel Tassy, the group’s lead singer for nearly 50 years, who appears discontented in the film, lamenting, “I need a little respect from this institution.”

Mr. Tassy, who is in his mid 70s, performed only briefly at the Brooklyn concert last week, his once-acclaimed voice seemingly weak. Younger members of the group dominated the show. “Some people want Septen to stay the same. I understand that,” Mr. Levy said. “You have some young people that come into the band with new ideas that the old generation doesn’t share.”

In one attempt to appease the retiring guard, the band is working to create a pension and medical plans for retired members, according to its management.

But the show goes on. Now in its 64th year, Septen plays more than 200 gigs a year. This week it will perform three more times in the New York area—at the Maranatha Auditorium in Queens on Friday, at the Aroma Lounge in Elizabeth, N.J., on Saturday, and at the Vault Cafe, in Elmont, N.Y., on Sunday.

“Septen has been through a lot over the years, and musicians come and go,” Mr. Levy said. “That refreshening is how an institution survives.”