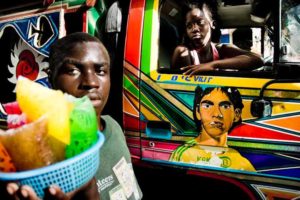 PORT-AU-PRINCE, Haiti (defend.ht) – The head of the Directorate of Traffic and the Traffic Police, the Divisional Commissioner Will Dimanche, informed that as of Monday, April 9, it is illegal for drivers of transit vehicles to transport passengers along with goods and livestock.

According to Commissioner Will Dimanche, the practice would be one of the causes of the terrible traffic accidents recorded on national roads.

Indeed two accidents recorded in the space of two days last week, the national #2 up to Morne Tapion killed nearly 30 people and sixty were injured.

He also stressed that the traffic police, which he is commanding, is facing a shortage of human and material resources, with no budget to deal with such abuses.

The formula is: “one man, one mission and means,” he said adding that “the will is there but we have very little means, this is abnormal, he lamented, given the enormity of the work and bad road conditions.”

He recalled that the traffic police working with only 50% capacity and calls for a collective awareness, to prevent such tragedy.

Last week, two accidents in the space of two days, at Morne Tapion on National Road# 2, were thirty dead and wounded about 60.

The most serious of the two accidents occurred Saturday, April 7 leaving 25 people dead and 46 injured. This is, for the most part, traders who transported southwards from Port-au-Prince, goods and livestock.

This is a truly stupid order.

It will effectively screw up a major percentage of the Haitian peasant commerce since there is no other way to move animals. Sounds kind of primitive, but that is Haiti. Many a Tap Tap passes my place with a few goats mixed in with people and there is simply no alternative.

If Will Dimanche suddenly passed an order, which his office could do, to the effect that any vehicle with only one headlight, tail light, bad brakes, no windshield wiper blades…you name it..most commerce would stop – instantly! Or there would be a coup.