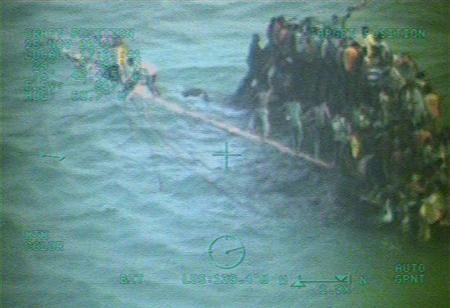 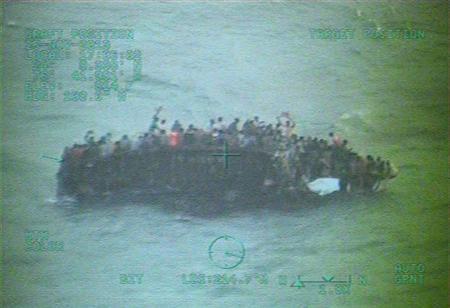 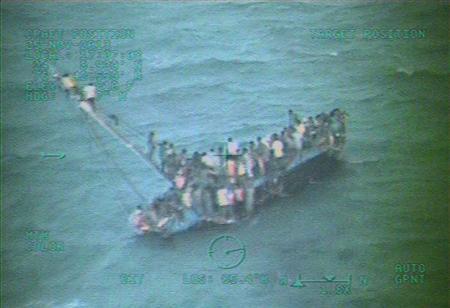 1 of 4. Approximately 100 Haitians sit on the hull of a sail freighter after it grounded and capsized 15 nautical miles southwest of Staniel Cay, Bahamas, November 26, 2013.

(Reuters) – At least 10 Haitian migrants were killed and rescuers scrambled to save about 100 more who clung to the hull and mast of an overloaded freighter that capsized in the Bahamas, the U.S. Coast Guard said on Tuesday.

Crews in U.S. planes and helicopters dropped 10 quick-inflating life rafts into the water to help keep the other survivors afloat until a Royal Bahamian Defense Force patrol boat could take them aboard, he said.

“They drop it right next to them and they can swim over. Once they’re out of the water they have a better chance of surviving,” Barney said. “There’s just so many people in the water.”

Dramatic Coast Guard photos from the scene showed the vessel tilted almost completely over on its side, with passengers tightly packed and holding on. Some sat on the gunnels and others climbed the mast.

The cause of the accident was unknown and will be investigated by Bahamian authorities, Barney said.

Migrants from Haiti, Cuba and other Caribbean countries frequently sail through the Bahamas in an attempt to reach the United States, often in overloaded and unseaworthy vessels.

Miami is more than 600 miles from Haiti’s northern coast, where such voyages frequently begin.