The second of two parts: In a country recovering from recent catastrophes, its people are looking to Internet-connectedness and the great potential their homeland has to gain
October 20, 2013 12:17 am 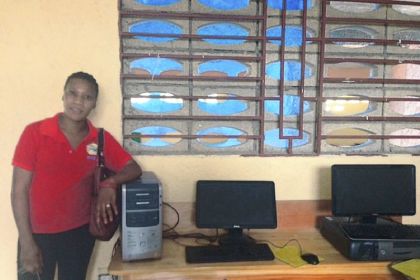 The second of two parts.

SAINT-MARC, Haiti — At the cusp of sunrise in Saint-Marc, Haiti, when laborers roused by a rooster’s crow join farmers and merchants already hours into the work day, 17-year-old Servius Madsen begins his daily trek to school. Armed with the family laptop and enough snacks to fuel the 15-hour day ahead, the high school senior takes the journey with lighthearted steps.

For today — like every other day since James Stine College unveiled its Internet-connected computer lab in 2011 — is another chance for Servius to master Linux, Java, C++ and other design programs he has spent hours teaching himself. In addition to being a student, Servius acts as the information technology professional who is building the firewall for his school’s network, as well as the community leader passing on his skills through a computer club for students and the community’s adults.

Madame Louis Baptiste Nadege talks about the benefits of getting computers into Haiti’s classrooms. (Video by Deborah Todd; 10/20/2013)

Servius Madsen is a standout example of what a fully wired Haiti has the potential to accomplish. But in a country where homelessness, hunger and infectious disease are rampant due to a catastrophic recent past, technology education sits low on the totem pole of priorities for recovery.

As the world’s philanthropic community watches recovery efforts in Haiti and other developing nations unfold, opinions about which efforts should take center stage — and get funding — abound. With 40 percent unemployment battling for attention with a cholera epidemic that has killed more than 8,000, it’s easy to cast technology education aside as a luxury.

In August, Microsoft founder Bill Gates caught some heat for statements that initiatives such as Google’s Project Loon, which deploys Internet access to remote developing nations through weather balloons, are misguided attempts to help nations that have more pressing issues.

“Certainly I’m a huge believer in the digital revolution. And connecting up primary health care centers, connecting up schools, those are good things. But no, those are not, for the really low-income countries, unless you directly say we’re going to do something about malaria,” he said in an August interview with Bloomberg Businessweek.

But for Servius and those using wireless connectivity for everything from tracking families in tent cities to diagnosing diseases through video phones, dismissing technology as a first-world necessity dismisses one of the best opportunities that developing nations have for parity with the rest of the world.

“Because of the Internet, our people have more knowledge. They have access to information that allows them to create things and learn things from the other side of the world,” Servius said. “Access to information is something that is as necessary and important as water and electricity.”

Advancing technology access and education in Haiti, where a mere 0.2 percent of the population are regular Internet users and where intermittent electricity service causes frequent blackouts, is no simple feat. A lack of wired infrastructure and available electricity to power wireless antennas compounds the challenges that the nation’s Internet service providers face when trying to extend their reach.

However, technologies such as Worldwide Interoperability for Microwave Access — or WiMAX — which can transmit 3G and 4G wireless broadband service as far as 30 miles, gives companies such as Caribbean wireless provider Digicel additional options to connect customers. Digicel, Haiti’s largest wireless provider, has 1.6 million customers with data capable phones powered by WiMAX — 38 percent of its total subscribers.

Additionally, in the nation’s cities, cyber cafes where users have enough speed to check emails and Facebook, download videos and complete other basic online tasks can be found practically by the block.

For agencies in charge of complex recovery missions involving logistics and medical care, even the most basic Internet access has been invaluable.

The Displacement Tracking Matrix, a database of recovery camps created by the International Organization of Migration, notes a camp’s GPS coordinates; the types of services and security provisions that are available; the type and number of shelters; and the hometowns of camp residents. The multifaceted monitoring helped to decrease the number of camp residents from 1.5 million to 520,000 between 2010 and 2011 by keeping track of which families had received relief funding to rent housing and which ones were next in line for the grants.

In the case of Sandeep Kohli, who works in internal medicine and critical care at Oakville Trafalgar Memorial Hospital in Ontario, Canada, the Internet wasn’t necessary to provide care for thousands of patients he saw at Project Medishare Charitable Hospital in Port Au Prince following the 2010 earthquake. In fact, the height of the hospital’s technology at that time was an EKG machine pieced together by Dr. Kohli and two volunteer engineers out of old machine parts.

Three years later, with the EKG prototype upgraded to an iPhone-powered iEKG, Dr. Kohli sees the Internet as a chance to not only save lives in Haiti, but to build careers. The iEKG is the first product to come out of Dr. Kohli’s medical device startup, Miami-based Triomi Medical Innovations.

Dr. Kohli has teamed up with Ting Shih, founder and CEO of the mobile Internet diagnostic company Click Medix, to integrate the EKG machine with Click Medix diagnostic equipment to provide over-the-phone consultations to residents of remote villages with no nearby health clinics.

Ms. Shih, a Carnegie Mellon University graduate who founded the Gaithersburg, Md., company with Massachusetts Institute of Technology students, used a $6,000 grant from MIT for startup costs and kept it running with $50,000 of her own. She said the technology is set up to make novices into diagnostic experts by using words and pictures on smartphones to show them the right questions to ask patients.

So far, she said, “community technicians” from remote villages in India, Ghana and 11 other countries have learned to reach diagnoses for cancer; ear, nose and throat issues; diabetes; eye; and heart disease examinations. Patient information is forwarded to physicians in local hospitals for a final diagnosis, but within months, technicians on the ground are making diagnoses for some diseases that are 90 percent in line with the physicians.

Dr. Kohli said a prototype of the Click Medix cardiology program will be ready by February and he plans to take several units back to Project Medishare in Port Au Prince next year.

“If you empower people locally to use computers, they can learn to code programs specifically for local use, help to build a local economy and give themselves everything they need to become self-sufficient,” he said.

Getting connected in school

The digital path to self-sufficiency has gained slow but steady momentum here in the past few years. Last year, San Francisco-based Inveneo launched the Intel-sponsored Digital Literacy for Haiti Rebuilding program and the Haiti Connected Schools Program, which have taught thousands of Haitians basic computer skills and created solar-powered computer labs in 40 schools.

Digicel’s nonprofit arm, the Digicel Foundation, has built 101 schools, nine of which feature Internet-connected computer labs. The computer lab at James Stine College, which features 39 laptops, was provided by Hershey, Pa.-based Mortel Family Charitable Foundation’s High Hopes for Haiti project, with the help of a $100,000 donation from the United Food and Commercial Workers International Union.

Stanton Heights-based Functional Literacy Ministry of Haiti recently opened Excelsior Technical School, which will train students in Haiti’s Thomassen 32 region in computer repairs and other skilled trades, thanks to a $265,000 matching grant donation from the Dave Matthews Band Foundation.

But for the many Haitian citizens who believe self-sufficiency starts and ends at their front doors, seeking help to fund a digital revolution was not an option.

Louis Baptiste Nadege, educational director of the Steve Apple Polytechnic Center of Haiti, saved up for two years to get the $5,000 necessary to equip the Thomassen-based school with nine Hewlett Packard and Compaq desktops. From seventh grade on, she said students learn to open email, general Internet searches, and work with Microsoft PowerPoint, Excel and other programs she deemed fundamental. The school is also able to download updated textbooks and print paper versions.

With some students still afraid to enter the school because its concrete foundation resembles buildings flattened by the 2010 earthquake, Mrs. Nadege said there’s no way to ignore ongoing issues caused by the natural disaster.

Regardless, when the notion of forgoing technology education in favor of a full press to eliminate disease was mentioned, her face clouded in disapproval.

“If someone is sick and we make something to cure that person, that is good for one person. But when people are learning, you’re helping to build their brain so you’re building something for all of the world,” she said.