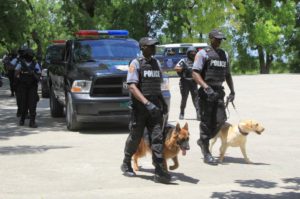 By jacqueline charles and Aaron Morrison

UNITED NATIONS — As an increasingly confident and stronger Haitian police force take control of Haiti’s security, major crimes are seeing a double-digit drop and the United Nations is intensifying discussions about its future in the country.

The talks of a reconfigured U.N. Stabilization Mission in Haiti, known as MINUSTAH, comes as peacekeepers prepare to mark 10 years in June, and as Haiti’s clashing politicians shows signs of compromise. Earlier this month, President Michel Martelly, lawmakers and political opponents signed an agreement creating a road map for long overdue local and legislative elections later this year.

“We are encouraged by recent announcements that these elections will take place this fall, but these words must now be turned into action and must translate into voters casting their ballots at the polling stations,” Canada’s U.N. Permanent Representative Guillermo Rishchynski said Monday.

Rishchynski, and other U.N. Secretary Council members were asked Monday to consider five broad options for a reconfigured U.N. presence in Haiti post 2016. The options range from a special envoy, special political mission to a new mission — all with no military component. The other two options are a new mission with a small military quick reaction force or a renewal MINUSTAH’s mandate with a continued downsizing of its 5,702 troops.

The options are outlined in a report by U.N. Secretary General Ban Ki-moon. It notes that between 2012 and 2013, Haiti saw a 21 percent drop in homicides, reversing a five year trend, and kidnappings dropped by 53 percent.

The Haiti National Police also grew to 11,228. Council members said HNP’s progress was “very encouraging,” while noting that it had dismantled several gangs in the metropolitan area, and launched several community policing initiatives including putting officers on bicycles in crime-ridden neighborhoods.

“The performance of the Haitian National Police continued to improve and the security situation in the five departments vacated by MINUSTAH’s military component remained stable,” U.N. Envoy to Haiti Sandra Honoré told the council.

No decision was taken Monday, with Honoré saying, “a full scale U.N. wide strategic assessment should be conducted to provide this council with an updated, in-depth evaluation of conditions on the ground.”

Several nations worried that upcoming elections, including 2015 presidential balloting, could plunge Haiti back into insecurity. The report said demonstrations increased by 57 percent last year due to political tensions, and the U.N. had to be called in by HNP for backup support on several occasions.

Mahmoud Daifallah Mahmoud Hmoud, senior deputy representative for Jordan, said the demonstrations “clearly show frustrations and even exacerbation among people who want to take part in the political process of their country.”

Samantha Power, the United States’ representative, noted that HNP’s gains had not been matched by the judiciary or Haiti’s ability to clear out its jails where more than half of the prisoners remain in pre-trial detention.

“The government of Haiti and its partners, including MINUSTAH, also must prioritize the development of the judiciary, the corrections system and oversight mechanisms,” Power said. “Further minimizing the number of prisoners held in pre-trial detention, for example, would be a key indicator of the government’s commitment to strengthening due process in the legal and corrections systems.”

Council members said it was important for any transition from the present day configuration not erode gains made over the years.

“Important achievements of MINUSTAH so far should not give us the false impressions that the task of the United Nations in Haiti is over, or even close to being over,” Peru Ambassador Gustavo Meza-Cuadra Velasquez said.

“Experience has taught us there are severe consequences in some countries when our organization opt to withdraw its presence in the field before the time had come.”