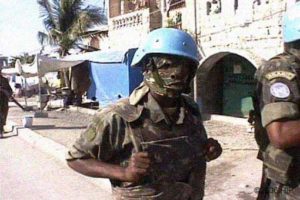 This week marks two years since United Nations (UN) troops inadvertently but recklessly introduced cholera to Haiti by leaking untreated human waste into Haiti’s largest river. Since then, over 7,400 Haitians have died and more than 580,000 have been sickened, and the epidemic continues to take lives.

On Monday, the Pan-American Health Organization (PAHO) hosted a meeting with a coalition of organizations on the long-term water, sanitation and hygiene interventions needed to eliminate cholera from Haiti. In the hour-long meeting, the coalition made no mention of the UN’s role in introducing cholera and its resulting responsibility to address the epidemic.

When a colleague in the audience probed this significant omission, Jon Andrus, the Deputy Director of PAHO, responded that they need to “move forward [and] stay focused… to save more lives more quickly. We don’t want this effort be deflected.” Quoting epidemiologist Bill Foege, Mr. Andrus spoke of a need to surround themselves with positive, forward-looking optimists. This response mirrors the UN’s attempts to dismiss calls for UN accountability as diversions or a blame game.

The insinuation that including accountability in the conversation is counter-productive and pessimistic is erroneous and has dangerous consequences. The successful elimination of cholera in Haiti will require large-scale and long-term investments of resources. Two years after the outbreak, the plan to eliminate cholera still lacks funding or concrete implementation. The UN not only bears the legal and moral responsibility to provide these things, but is also one of the few organizations in the world with the technical and financial capacity to do so. Omitting the UN’s responsibility from the discussion is irresponsible, and in this case, fatal.

In November 2011, the Institute for Justice & Democracy in Haiti and our Haiti-based partner, the Bureau des Avocats Internationaux, filed claims on behalf of 5,000 Haitians seeking compensation for loss of lives, water and sanitation infrastructure necessary to control cholera, and a public acknowledgement of responsibility. We filed these claims to challenge the UN to live up to its commitments to human rights and to its responsibility to address the cholera crisis.

One year later, we still await a response from the UN. But we continue to fight for accountability precisely because, contrary to Mr. Andrus’ insinuation, we are forward-looking optimists, committed to a better future for Haiti and a United Nations that is a positive force in the world.

The thousands of advocates that have come together to call for justice from the UN are motivated by a shared commitment to sustainable solutions that will stop cholera’s killing and a shared optimism that the UN will eventually emerge to do the right thing. But they recognize that “moving forward” also requires that victims who have lost their loved ones and their bread-winners be made whole through compensation and an acknowledgement of regret. This has never been the subject of debate in other man-made disasters, whether the BP oil spill or 9/11, and it should not be questioned in Haiti, especially where the party responsible is a champion of human rights and has the resources to provide a just response.

My vision for a just world is one that the UN itself has inspired, and one that I believe the UN ultimately shares. But to reclaim its position as a credible force for human rights, the UN must first allow accountability to be a part of the conversation about ending cholera in Haiti. Anything less is an affront to individuals like Bill Foege, who have dedicated their lives to eradicating disease and challenging inequality. Optimists like me know we can do better.