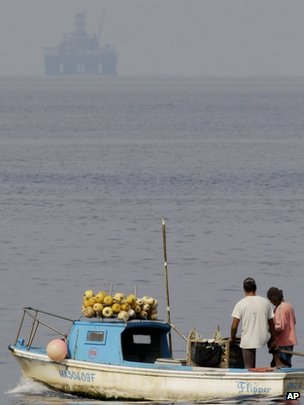 The rig can be seen from the seafront in Havana

Spanish company Repsol has said it is pulling out of Cuba after failing in a recent attempt to find oil off the island.

Chairman Antonio Brufau told journalists and investors that Repsol “won’t do another” well in Cuba.

On 18 May Repsol announced an exploratory well it had drilled north of the Cuban coast had come up dry.

Cuba’s communist government is relying on potentially huge oil and gas reserves to revive the economy.

The decision to stop operations in Cuba was announced at the firm’s headquarters in Madrid at a briefing on Repsol’s investment plans for the next four years.

“At this point we don’t think it is worth continuing to drill, at least not in our blocs,” said Repsol spokesman Kristian Rix.

He told the BBC that the decision to cease operations in Cuba was purely technical.

“Offshore drilling is very expensive and there is quite a risk involved. Four out of five attempts came out dry.”

Offshore drilling is very expensive. We have decided it wasn’t worth continuing”

Mr Rix said Repsol failed in a previous attempt to find oil off Cuba in 2004.

“Now we hit another dry well and we have decided it wasn’t worth continuing. We are very unlikely to do another well there.”

Malaysian oil company Petronas is now expected to take over from Repsol in trying to find oil in Cuban waters.

Venezuelan importsThe island produces only half of the oil it needs, and relies on subsidised imports from President Hugo Chavez’s government in Venezuela for its energy needs.

Cuba imports more than 100,000 barrels a day at favoured rates, paid for with the services of thousands of doctors and health workers working in Venezuela.

The BBC’s Sarah Rainsford in Havana says that finding substantive offshore reserves of its own would break that dependence.

Drilling off Cuba’s northern coast began some four months ago.

The Scarabeo 9 oil rig was brought from China to bypass the US trade embargo imposed on the communist island five decades ago.

Preliminary studies of the rock formation beneath Cuban waters estimate that the island has deposits of between 5bn and 20bn barrels of oil.