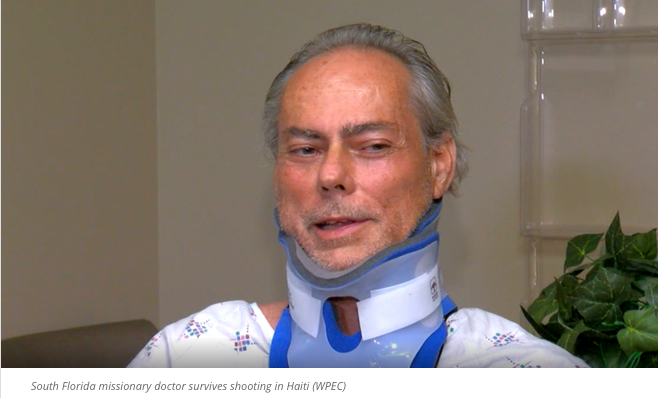 Dr. Douglas Burbella was shot three times while on a missionary trip in Haiti on April 4th.

He and seven others were heading to a small town to provide medical care, when they were ambushed by a gang of attackers at a roadblock.

“They chased us on foot, and they opened fire on us, so we had a barrage of, a hailstorm of bullets coming at us,” he said.

Burbella was hit in the shoulder, neck and jaw. He said he died at that moment on that two-lane road in Haiti.

Moments later, Burbella said his spirit returned to his body and he came back to life.

“Three guys came up to the window to finish me off and they all pointed their guns at the window and they were aiming down the barrel, squinting and I said I gotta play possum and fast,” he said.

The 58-year-old doctor said he faked that he was dead and laid still, then he said a mystery person came up to the pickup he was in and got the gunmen to back off.

“A man appeared from nowhere and put his hand up and said, ‘No,’ pushed the man back,” he said.

Burbella said he owes his life to that individual, whom he calls an angel, who saved his life and the lives of the seven others with him.

Although the three gunmen did rob him, his life was spared.

“They got $11 dollars out of my wallet, took my cell phone, and just treated me like a piece of garbage and then they just left me,” Burbella said.

Doctors expect he will make a full recovery and in a few months, if his wife approves of it, he wants to go back to Haiti.

A GoFundMe pagewas created to help with medical expenses.

This crime shook Haiti to its roots, but no follow-up has seen the attackers arrested, indicating just how badly off course our Nation is.

The community, surrounding the attack site, knows who the guilty people are.

There was a news report today, to the effect that Doctor Burbella had died. We are thankful that this is not true.