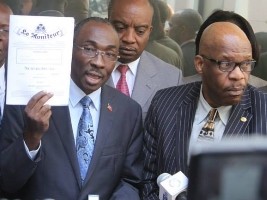 Police Inspector Michel Henri said three electoral offices were set on fire late Sunday in communities around the northern city of Cap-Haitien and at least three others were pelted with rocks and other objects.

Henri said the three offices that were set ablaze “weren’t totally destroyed” because people managed to douse the flames. There have been no arrests.

The OAS is calling on Haitians involved in the elections to reject violence and “act peacefully.”

Several government buildings were burned last month and one demonstrator was killed in violent protests sparked by the release of final legislative election results.