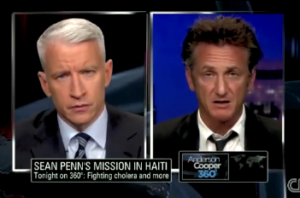 Could halting the cholera outbreak in Haiti be just a matter of water?  That’s what Sean Penn, the actor and activist who visited Haiti last week told CNN’s AC360° on Monday night.

People must stop using contaminated water, he said, pointing out that they will only do that if clean water is provided.  “So, whether that’s through filtration systems or trucked in water, this is going to be the essential element – water, water, water,” Penn told Anderson Cooper.  Cholera, a bacterial infection, is typically spread by contaminated water and food.  Although the disease is treatable, it can kill within hours without treatment.  “Now we have this terrible epidemic, and if it hits camps… we’re going to have a devastation that nobody wants to see,” he said.

Penn’s relief organization J/P HRO runs camps sheltering Haitians after the January earthquake that left 1.6 million homeless and killed a quarter of a million people. The actor says his camps are preparing to treat the outbreak if that becomes necessary.  “We’re stockpiling [supplies] now but it’s slow and our access has been disappointing to those supplies in country. We have those things that we’re initiating ourselves and with support we’ll be able to do a lot more.”

So far the World Health Organization says the Haitian government has confirmed 259 deaths and more than 3,300 cases of the bacterial infection.  A contaminated river in the Artibonite region is the suspected source of the outbreak.