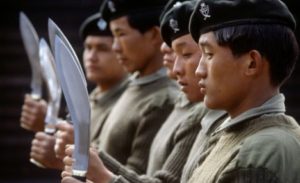 Haiti is a land with absolutely no history of cholera.

Haiti’s Minister of Health, Doctor Larsen snapped….”I don’t know where it came from!!!” when a journalist asked a rather stupid question, a question that seemed to blame Haitians for this current outrage.

How is it that we are now assailed with a cholera epidemic?

As with any study, one must look at the cause and effect.  An the hastily mounted investigation revealed a truth that the United Nations is now trying to suppress. By suppressing the truth, a proper handling of the emergency is less likely. 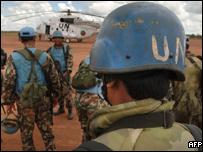 In this case, the cause is the Nepalese United Nations, MUNUSTAH contingent in Mirebalais.

Some, if not all, of this contingent are Cholera Carriers…….people who carry the cholera threat within their systems, without suffering any apparent problems.

This CONTINGENT defecates, like any other contingent, with the exception that their shit carries the cholera strain. Locals say the Nepalese are not the most sanitary  people in town. This human debris has been eaten by animals, or dumped into the water table in such a way that it has infected a tributary to the great Artibonite River system, a system upon which countless Haitians depend upon for life-giving water supplies.

Now that we have the cause, what is the effect???

The effect is two fold, at least.

First of all we have an immediate threat of cholera, and all that comes with this disease. People will die. There is wide spread panic. Foreigners are avoiding Haiti – like the plague – as the saying goes, and we do have a plague, one brought by the foreign troops.

With the introduction of Cholera, we will now have your own base of Carriers, to stand as potential threat in the immediate and long-term future.  We have a new threat that did not exist before.

In the short, medium and long-term Haiti will suffer from a reputation that derails  all types of investment….and tourism. Who wants to vacation in a place that has a history of cholera.

Haiti was once – WRONGLY –  blamed for the AIDS/SIDA problems in America.

This stupidity effectively ruined many things for a small – charming nation.

When the truth was finally discovered, it was already too late.

The damage had been done.

Let’s reveal the truth on the Cholera outbreak now!

Our MINUSTAH guests are responsible and focus on a cover-up, rather than a full-bodied treatment of something that could get much worse over the coming days.

The United Nations should look into the health backgrounds, of all contingents, before sending them to infect uninfected territories…or is their approach one to spread disease and thus justify bigger and better treatment projects – with the attendant costs added to the already horrendous UN budget.???