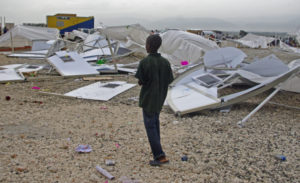 SEAN PENN’s charity efforts in Haiti have been dealt another blow – a storm wrecked the temporary J/P Haitian Relief Organization (HRO) settlement over the weekend (24-26Sep10).

The actor and his team of volunteers and experts were forced to temporarily abandon the HRO’s Petionville Camp and relocate to a club gymnasium in Port-au-Prince until the storm passed on Sunday.

No major injuries have been reported but the heavy winds and rain destroyed a hospital, pharmacy and many medical supplies, causing an estimated $350,000 (£233,300) of damage.

Despite the setback, J/P HRO staffers continue to provide medical support and services for the homeless 50,000 living in the Petionville Camp. Other camps in Port-au-Prince and across the country did not weather the storm as effectively, as at least five fatalities have been reported and major flooding continues to devastate the region.

Penn says, “It has been a very difficult 24 hours for our team and the community they serve in Petionville, but they have weathered this storm with courage, and continue to perform heroic and vital services for the people of Haiti, even under the most dire of conditions.

“The combined efforts of J/P HRO and the U.S. Military dramatically minimised harm and damage to the largest tent camp of internally displaced persons.”

And the actor, who founded the organisation, is firing back at groups who criticised his warnings about the storms: “Drainage mitigation and relocations that had been previously criticised by some U.N. organisations proved their value. We have been shouting for months about the severity of the hurricane season, and this underscores the importance for the need of sustained and smart support in the region.”

Penn and his J/P Haitian Relief Organization partners are asking friends and supporters to help rebuild the lost infrastructure and to continue their efforts in Haiti.