Hollywood actor Liam Neeson has said that Ireland has lost a part of its soul with the death of Seamus Heaney.

Nobel laureate Mr Heaney has died at the age of 74.

Mr Heaney was born near Toomebridge, but as a child moved to Bellaghy in County Londonderry.

He added: “He crafted, through his poetry, who we are as a species and the living soil that we toiled in. By doing so, he defined our place in the universe. May he rest in peace”.

‘A poet to be grateful for’

Of all the accolades and compliments pressed upon Seamus Heaney in a stellar writing career in the last half a century, the critic Karl Miller’s was one of his favourites.

Miller described Heaney as “a poet to be grateful for”.

I know Seamus liked this tribute because he expressly asked me to use it in the introduction I was writing to accompany an interview I had done with him for a book.

I’d originally referred to him as being widely regarded as the foremost poet of his generation, but he asked me to replace that comment with the Miller line.

I wasn’t surprised at the request – Seamus always wore his tremendous success lightly.

He was a giant of the literary world who never forgot his roots.

Mr Heaney was a teacher and then had a distinguished career in poetry, winning the Nobel prize for literature in 1995.

Northern Ireland Deputy First Minister Martin McGuinness said he is shocked and saddened by the death of poet Seamus Heaney.

He said Mr Heaney was a “colossus of literature”.

“We’re all much poorer as a result of his passing today and I feel it very deeply,” he said.’

Former US President Bill Clinton said “his uniquely Irish gift for language made him our finest poet of the rhythms of ordinary lives and a powerful voice for peace”.

Dr Daly is remembered as the young priest waving a white handkerchief in an iconic photograph from Bloody Sunday.

“Seamus had a very full life. He was a very generous and gentle person and a wonderful poet. He has left a huge legacy behind him,” Dr Daly said.

“He has left so much for us all to treasure and enjoy. His legacy will live on for centuries.”

Heaney was a classmate of Dr Daly’s brother in St Columb’s College, Londonderry.

“He wore his huge wisdom very lightly and he gave so generously of his time. He was kind and he had a very gentle wit,” he said.

Former SDLP leader John Hume, who was a close friend of Mr Heaney, said: “His poetry expressed a special love of people, place and diversity of life.

“That profound regard for humanity has made his poetry a special channel for repudiating violence, injustice and prejudice, and urging us all to the better side of our human nature.”

Northern Ireland Secretary Theresa Villiers said: “Seamus was undoubtedly one of the greatest literary voices the island of Ireland has ever produced and a great ambassador for Northern Ireland.

“It is some consolation that his spirit will live on through his legacy of work and that future generations will continue to be inspired by his distinctive poetic voice.”

“Scholars all over the world will have gained from the depth of the critical essays, and so many rights organisations will want to thank him for all the solidarity he gave to the struggles within the republic of conscience.”

Fellow Northern Ireland poet Michael Longley said: “I feel like I’ve lost a brother and there are tens of thousands of people today who will be feeling personally bereaved because he had a great presence.

“Just as his presence filled a room, his marvellous poems filled the hearts of generations of readers.”

“We all remember how President Bill Clinton chose Heaney’s great phrase about when ‘hope and history rhyme’ from Heaney’s play Cure at Troy in his speech in Londonderry, and went on to use it for the title of his book detailing his vision of the USA in the 21st Century.”

“Anywhere I have ever travelled in the world and you mention poetry and literature and the name of Seamus Heaney comes up immediately.” 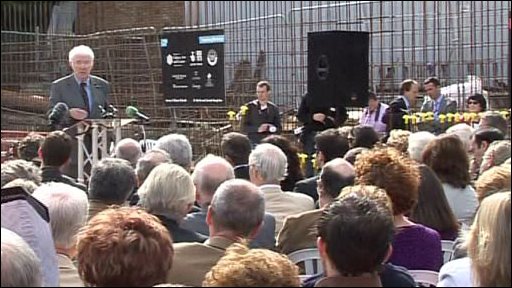 Belfast’s Lyric Theatre tweeted: “The Lyric Theatre is deeply saddened that Seamus Heaney, our long-term friend and supporter, has passed away.”

Damien Smith, head of literature and drama at the Northern Ireland Arts Council said: “Those closest to him also include vast numbers of people from right across the globe who read his poetry from his first book when it appeared in the mid-60s.

“He will be remembered in artistic terms as among the very great poets.”

“Over the years, as I began to write myself, I met him and he was always very generous to younger writers.”

Seamus was a simple man who would slip in for a cup of tea with us,  and talk about the local events and news. In a truly polarized society, and Ireland was polarized at the time of our moments  together – Seamus was accepted everywhere, by everyone – with pride.

Ireland is a place that honours artistic skills.

It has many fine writers, and poets who are as poor as church mice, yet these have an honored place in our society.

Ireland is a special place.

Seamus was a special Irishman.