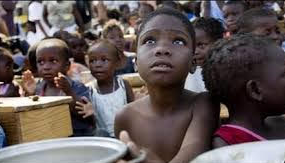 People in developing nations don’t go hungry because there’s not enough food to go around. It’s because they’re poor.

The United Nations World Food Programme just released a report on the cost, relative to average income, of a basic meal such as rice and beans in 33 countries. Someone living in New York might spend less than 1 percent of their daily income for that plate of food. But someone in Yemen would need to spend 22 percent of their daily income, while it would be 30 percent in Mozambique and 35 percent in Haiti. Compared to a New Yorker’s income, the true cost of the meal would be $1.20 in New York, about $46 in Yemen, $62 in Mozambique and $73 in Haiti.

The American Farm Bureau Federation and other Big Ag interests argue that U.S. agriculture has the burden of feeding the world. But EWG’s Feeding the World analysis showed that most of America’s agricultural exports go to wealthy, developed countries that can afford them. In 2015, less than 1 percent of agricultural exports went to countries with pervasive hunger such as Haiti.

Meanwhile, after decades of hunger declining in much of the world, rates of hunger are starting to creep back up in regions such as Latin America and the Caribbean. The U.N. report is more proof that ramping up crop and livestock production – at whatever cost to public health and the environment – is not the solution.

Rhetoric about feeding the world does not put food on the tables of the undernourished. To have a real impact on world hunger, the U.S. should work to reduce poverty, and improve infrastructure like roads and markets to increase access to food. There’s enough food for everyone if it’s affordable and fairly distributed.