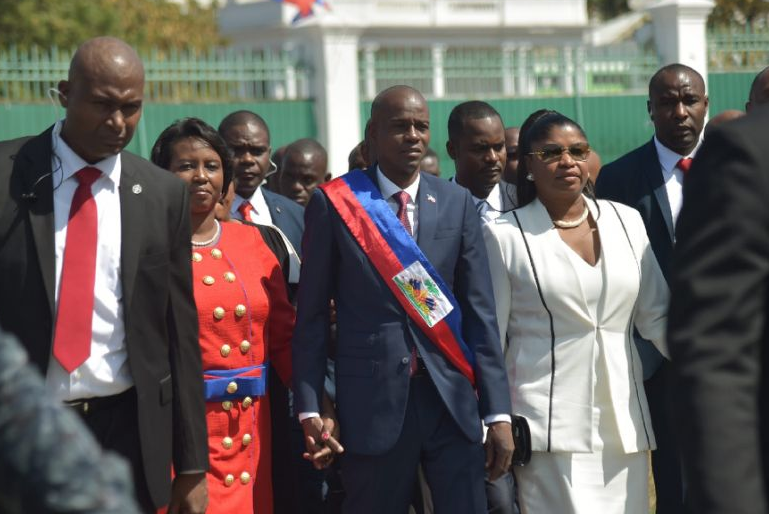 “Mr President your clear-cut victory, in the first round of elections, was an indication of the confidence that your people have in your ability to lead them to a better life. I look forward to working closely with you and your administration, towards Haiti’s further integration into CARICOM,” said CARICOM Secretary General Irwin LaRocque in his remarks at the opening of the 28th Inter-Sessional meeting on Thursday morning.

Outgoing CARICOM Chairman, Prime Minister Roosevelt Skerrit of Dominica said he is looking for the “fresh insight” that Moise will bring to CARICOM deliberations.

“Your victory at the polls is a reflection of your nation’s faith in your leadership, and we would work closely with you to fulfill the aspiration of the Haitian people,” Skerrit pledged.

Meanwhile, Guyana’s President David Granger, said t he was inspired by the Haitian president’s passion and commitment to his people and the region.

“The Republic of Haiti is the Caribbean’s oldest Independent state; it is the CARICOM’s most populist member, and its largest market. We look forward to strengthening our fraternal ties. We look forward to Haiti’s continued participation in our community’s works,” Granger said.

Moise was sworn in as Haiti’s 58th president, on February 7.

The 48-year-old banana exporter, who has never held political office, initially won the first round of voting in October 2015, but the results were subsequently annulled amid allegations of massive fraud.

Moise won the subsequent election held in November 2016 with 55 per cent of the votes.

Haiti’s process of joining CARICOM began in 1997, but the country was not admitted as a full member until 1999, and the Haitian Parliament only ratified final accession on May 13, 2002.

The then President Jean Bertrand Aristide signed the revised Treaty of Chaguaramas on July 4, 2003, and trade between Haiti and the other countries of the region officially began on January 1, 2004.

The Lavalas Family party government however collapsed and was replaced by an interim government administration in March 2004.

Subsequent to this, a decision was made by the Caribbean leaders that Haiti would not be invited to participate in CARICOM meetings, on the grounds that the interim administration could not be accepted as a legitimate representative of the Haitian people.

With the election of a new President, René Préval and a new legislature, CARICOM leaders hailed the return of democracy and welcomed Haiti back into the organisation, bringing an end to a suspension that lasted more than two years.

Haiti, the 15th member of CARICOM has the largest population, but it is also the poorest member of organisation.