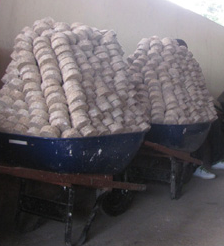 Before the recent earthquake, Haiti was no stranger to natural disasters. In recent years, thousands of people have been killed by floods and landslides. To understand why the toll is so high, one need look no further than the country’s bald mountains. Haiti has lost about 97 % of its forests. And the main culprit is the nation’s most popular cooking fuel: charcoal. Reporter Amy Bracken looks at one effort to provide a tree-saving alternative: briquettes made from trash. (photos: Amy Bracken)

Click here to play MP3 and listen to the discussion

It seems an unlikely place for a factory. The spare cement and metal structure sits atop a hill in a Port-au-Prince slum, next to a razor-wire-fringed UN peacekeeping base.

But this Saturday morning the factory is bustling. Wheelbarrows enter the front gate full of trash. At the other end of the floor, they are filled with neat stacks of what look like paper hockey pucks. In between is a low-tech recycling process that turns the neighborhood’s trash into cooking fuel.

Samuel Toussaint is a plant manager.

“We clean the neighborhood every day. We pick up trash, we sort the trash, and then our main activity is making briquettes. Over there, people are preparing materials”

Women sit on plastic buckets shredding wet paper and cardboard with their fingers. A man uses what looks like a giant mortar and pestle to mash the mixture. Others smoosh the paste into metal cylinders to mold it into briquettes, which will be sold as replacements for charcoal.

Most Haitians use charcoal from trees to cook every meal. And the demand for charcoal is destroying the nation’s forests. The hope here is to spare at least some of the trees by providing a cheap and easy alternative.

Ginette Sejour likes the idea. And it’s not just because the mother of seven is happy to have a job here shredding paper. She also feels good about the work.

“The briquettes protect our environment, because when people use these briquettes, fewer trees are cut down, fewer people die.”

The factory started selling briquettes late last year. It’s run by a community group, and funded in part by the UN. Backers hope it eventually can be self-sustaining. But it won’t be just by selling the briquettes, because in order to compete with charcoal, the price is kept artificially low.

Plant manager Samuel Toussaint says the profit will come from the rest of the trash his workers collect.

Toussaint is also leading an operation to turn organic waste into compost and sell that to farmers.

All of this is providing a big public benefit beyond reducing the demand for charcoal. The neighborhood’s once trash-filled streets and canals are much cleaner, and hundreds of jobs have been created. And its success has brought the project some influential backers.

Former President Bill Clinton, now the UN’s special envoy to Haiti, held up a sample briquette as he spoke to a crowd of Haitian-Americans in Miami last year.

“…and if it were successful, it would sweep the poor urban areas of the world. This could be done everywhere. Labor intensive, environmentally responsible.”

Plans are in the works to bring the program to other parts of Port-au-Prince, and there’s talk of replicating it across the country.

But old habits die hard, and there’s no guarantee the new fuel will catch on. Factory employees say their briquettes are used the same way as charcoal, heat more quickly, and give food the same taste. But you only have to look outside the factory to know that many people won’t soon change their ways.

Right by the factory’s front gate, there’s a man selling charcoal. 26-year-old Jemel Alcindor has been selling here for years. He says his business is as steady as ever. Not even the earthquake made a dent in it.

And even if the new briquettes do catch on, they will only have a limited impact on the country’s charcoal problem. That’s according to Eric Overvest, of the UN Development Program.

“The briquettes are not a solution for replacing charcoal…. There will not be enough paper and carton to replace charcoal. So it will always be a very small percentage of the total market.”

Which is one reason there are lots of other efforts underway here in Haiti to wean the country off charcoal. But whatever its wider impact, plant manager Samuel Toussaint says the briquette factory has already changed his community.

“We wouldn’t have been able to stand here before without fear. Thanks to the work of this project, the community has transformed. Some of the people who were terrorizing the community, they saw there was no place for them here. Other gang members were integrated into our program.”

Toussaint says because of the project, locals now feel good about where they live. And the men and women toiling here see themselves as part of a movement – one that could give a glimpse of a better Haiti – from cleaner streets to healthier forests.