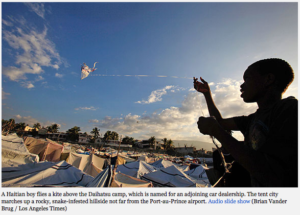 Reporting from Port-Au-Prince, Haiti – Morning arrives with the melody of the Haitian streets.

A rooster crows, and two street preachers stand near the gates of a new tent city. They are both women, both wearing black kerchiefs over their hair. One shouts hoarsely into a bullhorn while the other sings sweetly from a “singing bible,” a book of hymns. The sounds clash and blend, grate and harmonize, and the result is, incongruously, achingly beautiful, a sort of Haitian hip-hop gospel.

It is 6:30 a.m., and the refugee settlement known as the Daihatsu camp is coming to life for another day.

About 20 yards away, a group of teenage girls is in line at the one portable toilet in this camp of about 8,000 refugees from the Jan. 12 earthquake, one of about 500 such tent cities that have sprung up around the Haitian capital.

“You have to listen to them,” one is telling another, nodding toward the street preachers. “You have to have faith.”

That might seem hard, two weeks after the magnitude 7.0 quake shattered the world of everyone in this camp and killed at least 150,000 of their fellow Haitians, including many close relatives and friends. Life is not easy here at the Daihatsu camp, which is named for an adjoining car dealership and marches up a rocky, snake-infested hillside not far from the Port-au-Prince airport.

With the sun rising, people stir in their makeshift tents, most of them patched together out of spare linens and plastic sheets.

Louis Enord, 54, washes his face in a small plastic washbasin while still lying in bed, building up a good lather before rinsing vigorously.

“Life is not good here, but this is the only refugee camp we could come to,” says Enord, whose concrete block house in the Simond neighborhood collapsed. “We have no choice. We have to live here.”

Enord is an affable man who broke his leg in a car accident before the quake, costing him his job as an electric company meter reader, work he can’t perform on crutches. His new dwelling is about as good as it gets here: a waterproof tarp spread over a structure made of random-length sticks. It measures about 6 feet by 8 feet, and houses his family of four — a much better ratio of people to space than many families have.

Enord is at the very bottom of the hill. Looking up, the eye takes in a patchwork of homemade tents that are so close together as to appear to be an unbroken quilt, lightly billowing in hues of whites and blues and reds and yellows.

Since the earthquake, an estimated 500,000 people have moved into such camps in and around Port-au-Prince. About 50 of the sites were designated by the government after the disaster, but the vast majority are like Daihatsu — spontaneously created by individuals who had no place else to stay but the streets.

In the case of Daihatsu, people noticed the empty land and began pitching their homemade shelters the night of the earthquake. There were about 500 people that first night, scattered haphazardly around the site, according to Jude Emile, a volunteer firefighter who came here after his house collapsed.

Emile helped organize some young men into a leadership committee, and has become the de facto mayor of the camp, helping to organize it into some semblance of order: creating security and cleanup details and arranging the tents into rows, more or less, with passable walkways. Volunteer security guards patrol until 3 a.m.

The organizers have divided the field into five sectors, each with its own leadership, and have even given the tents street addresses. One sector, which sits next to a government bus yard, is known as Barack Obamaville because, people say, the U.S. government provided money for the buses.

Roberty Mirese, 42, is a resident of Obamaville. She sweeps the dirt around her tent and then, for good measure, sweeps around her neighbors’ tents. She is here with two of her five children; she sent the three younger ones to stay with a relative in the countryside.

The floor of her tent is swept as clean as a dirt floor can be.

“It’s not bad,” she says. “I’m lying in the dirt, the mosquitoes bite us all night, but we have no choice. We have to be here.”

Hers is a common attitude in a country where people have little in the best of times, and don’t expect much. Still, as the days have stretched on, a new mood of anxiety, even anger, has begun to slip into the tent city. Although it is one of the larger ones in Port-au-Prince, it has seen relatively little in the way of international assistance.

A few medical volunteers from Greece and the United States came one day to briefly care for children, but acknowledged that they were only able to scratch the surface. After seeing 20 children, including a boy whose skull was split open in the quake and had only a crude bandage covering it, Dr. Miltiadis Sarigiannidis of Medecins du Monde of Greece seemed discouraged.

“I didn’t see a child who wasn’t in need of medicine,” he said. “So I suppose there are hundreds of them in there who have no one to turn to.”

The Turkish Red Crescent Society sent volunteers to assess the needs of the camp, presumably for future aid. Asked what was needed most urgently, Ayberk Yurtsever pursed his lips. “Well, they need everything,” he said.

What they mostly need, residents say, is food.

The Red Cross brought in a 2, 640-gallon water tank, which is refilled daily and provides enough fresh water for the camp. But there had been only one food delivery, camp organizers say: 200 plates of rice and beans.

“Two hundred plates for 8,000 people!” says Joel Milord, an out-of-work accountant who is in charge of Sector 4 at the camp. Anyway, he says, people don’t want prepared food: They want the raw ingredients so they can cook themselves.

The day at Daihatsu has no discernible rhythm. Most people have nothing to do. They lounge around, clean their tents, talk. If they have money, they buy food from one of the vendors who have congregated near the entrance to the camp. But few have much money.

The afternoon is hot, and tempers sometimes flare. At one point, residents angrily confront Emile and accuse him of favoring some families with donated waterproof tarps. With most tents built of bedsheets or tablecloths, people worry about rain.

Brian Jean-Pierre yells that Emile has given two tarps to some families, and four tarps to one.

“None of what he is saying is true,” Emile insists.

The two men begin insulting each other. Emile suggests that Jean-Pierre is uneducated.

“I went to 12th grade; I finished school,” Jean-Pierre screams.

For all that, people get along remarkably well most of the time. Food is shared; songs are sung; prayers are prayed.

When night falls, the camp takes on a gentle glow under a charcoal sky. Candles turn the motley tents into radiant lace lanterns. At either end of this newly formed community, people gather for evening church services, praying with a fervor and a beauty that belies their plight.

“Help us, Jesus, and feel sympathy for us,” they sing, arms stretched skyward. “Even if we die, prepare a place in heaven for us. Hallelujah, Jesus. Hallelujah.”