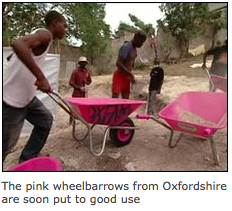 Fifty tonnes of aid supplies tracked by the BBC from Oxfordshire in the UK are nearing the end of their journey to Haiti’s quake-hit capital Port-au-Prince.

Apart from a few stretches littered with potholes, the road from Santo Domingo to Port-au-Prince is in quite good condition.

It snakes past the suburbs of the capital of the Dominican Republic, up and over hills wreathed in lush vegetation and soon into rural villages where grinding poverty is a way of life.

Around 200km (124 miles) west lies Jimani, the scruffy border city strung out along this road.

It is where thousands of Haitian refugees are living and where relief groups have set up clinics.

It is also the first real glimpse of the consequences of the earthquake.

The aid convoy passed this way as it carried supplies and emergency equipment from Oxfam, paid for with British donations to the UK Disasters Emergency Committee’s (DEC) Haiti Earthquake Appeal.

In the border zone, it passed through a bustling market – a regular occurrence.

Commerce goes on even if much else in the country can’t.

The journey from the frontier to the city centre should only take an hour or so, but the approach to this overcrowded city is jammed with traffic and makes for painfully slow progress.

It gives you time to look around – people are everywhere, as well as destruction.

Haitians here no longer seem dazed, they seem driven and barely notice the tumbled-down buildings that line the road.

The aid was taken to Oxfam’s offices in the Petionville area.

It is normally a posh hilltop enclave, but it was one of the worst-hit places.

Large elegant villas have tumbled, intricately-wrought iron staircases hang twisted off once sturdy buildings and mounds of rubble line some roads and block others.

Who knows how many dead lie unclaimed in there?

Oxfam’s offices consist of two adjacent three-storey buildings – one looks like it was sliced in half with the office interiors exposed through the broken walls.

Now the neighbouring building – which also sustained damage – houses dozens of its workers who have flown in to help.

Pallets of aid that have been transported thousands of miles lie in the courtyard: water bladders, tents, latrine blocks – and the BBC’s pink wheelbarrows.

The next day, we travel a few minutes from Oxfam’s offices to the Petionville Golf Club, a peaceful spot nestled among lush trees and next to the US ambassador’s private residence.

But now US troops man the gate – their Humvee vehicles lined up in the car park while soldiers set up their quarters on the tennis courts.

On the hills and greens behind is a sea of humanity.

The golf course has become a refugee camp and is home to 30,000 earthquake survivors.

And this is where the pink wheelbarrows are put to use.

In one area, people are clearing brush and debris and carting it off in the barrows. Latrine blocks are being laid. These are the beginnings of a much-needed sanitation system.

If disease were to break out in this camp, it would spread rapidly. Toilets won’t stop it, but they might slow it down.

It’s a dirty job, but many people are eager to do it.

That’s because the wheelbarrows are not a hand-out, they are a job opportunity and those who use them will be paid for their work.

Oxfam’s Andy Bastable, a public health expert who arrived soon after the earthquake, tells me the wheelbarrows are a way of helping Haitians help themselves – a small kick-start for a crumbled economy.

The camp is organised into zones, each with its own committee. One of the organisers, Louis Montas, is allocating wheelbarrows. There are not nearly enough tools for all the people who want them but he tells me 90 people will be able to work.

“It’s a small number,” he tells me, “but we’ve only been working for a week and we’re going to build toilets in the whole camp.”

Haitians do not want to be dependent. Aid like this is a tiny drop in an ocean of misery.

But it’s a start.