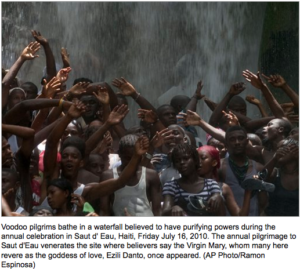 The annual pilgrimage to Saut d’Eau venerates the site where believers say the Virgin Mary — whom many here revere as the goddess of love, Ezili Danto — once appeared. The penitent and the pent-up alike strip off most of their clothes, cast them into the water and wash their sins and bad luck away in the tree-covered cascade.

“I’m coming to pray to God that something like the earthquake doesn’t happen again,” said Rosca Roseline, 46, who arrived from nearby on the Central Plateau accompanied by her daughter and a horse.

She also had another mission: selling homemade moonshine to other visitors, good for honoring spirits and soothing your own at 250 gourdes ($6.40) a gallon.

Thousands come to Saut d’Eau, or “Sodo” in Creole, each year for the three-day popular festival that peaks Friday.

Like the water itself, the pilgrimage takes on the color of whatever is around it. In 2004, with the capital melting down after a rebellion and ouster of the president, there were extra prayers for peace.

This year’s talk was about the earthquake — usually in very personal requests for new homes and new lives. Reconstruction has been at a standstill. An estimated 1.6 million people live under tarps and tents in the capital alone. Rubble and collapsed buildings line the streets. Only a lucky few have steady employment.

For 18-year-old Angeline Joseph, whose family lost their house near Port-au-Prince’s Champ de Mars, a new life would come in a very specific form: a husband. 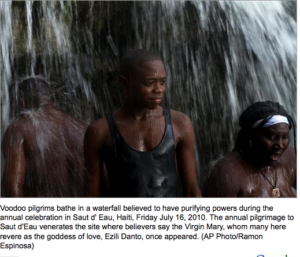 “I need someone who can stay with me,” she said, clutching the cleansing leaves and soap she would use in her prayers. “He has to have a job.”

For many teenagers and 20-somethings from the capital, the pilgrimage is nothing but a party. Drummers, monotone-horn blowers and cheering followers flow in behind flag-bearers advertising musical groups with names such as “Little Friend Band” and “Easy Band,” which fill the valley with a style of music called “ra-ra.” Bands sometimes try to one-up each other, other times blending their standards together into all new songs.

Others come for the religion, choosing between spirit rituals and church services — and often floating between both.

Voodoo — or Vodou, in the preferred spelling — originated during Haiti’s slave past as a hard-forged blend of West African and Christian religion. Africans trying to keep traditions alive under the close eye of their French masters blended the veneration of icons and biblical characters with the worship of gods both old and new.

On Friday, sunglassed rastas on motorcycles wound around mules carrying old women dressed in the colors of their chosen spirits. SUVs climbed the hill toward the white and blue gates to the falls. Aromas of incense, marijuana, alcohol, cooked food and a few thousand wet T-shirts, shorts and pants filled the air.

The post-quake flood of aid workers, journalists and travelers to the capital, about 45 miles (70 kilometers) to the south, brought more than the usual complement of North Americans and Europeans as well.

At the base of the falls a hougan, or priest, lit pipes and sang to help bring Mickelson Arnac, a 22-year-old lottery vendor, into the possession of Bosou, a three-horned, bull-headed spirit known for his hot temper and often identified with images of St. Vincent de Paul.

Mickelson-turned-Bosou, shirtless and in a pair of warm-up pants, swayed to and fro, poured ritual alcohol over a friend’s head and blessed those standing around him as a ra-ra band pushed by.

“I am celebrating my birthday here in Sodo,” the spirit said. Asked what he could do for his friends given their recent hardships, he replied: “Bosou can do what you want him to do.”