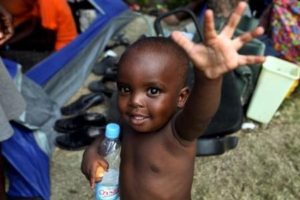 The U.S. Embassy in Port-au-Prince has a warning for U.S. citizens seeking to adopt children in Haiti: Don’t pay extra fees to expedite the adoption process.

Neither the Haitian nor U.S. governments charges expedite fees, the embassy said Friday in a communiqué. There also are no fees for additional visa services being charged by the U.S. Citizenship and Immigration Services or the State Department.

“If you are applying for a U.S. immigrant visa for an adopted child, do NOT pay any fees at cybercafés, banks, or to anyone outside the U.S. Embassy claiming to act on behalf of the U.S. government,” the embassy said. “Prospective adoptive parents who are asked to make payments for expedited visas fees to an adoption service provider should immediately report such behavior to PAPFraud@state.gov.”

The embassy, which is processing adoptions from Haiti filed on or after April 1, said it has received numerous reports from prospective adoptive parents that some adoption service providers are asking them to pay large sums of additional money to expedite the process.

Since last month, Haiti has been under the Hague Adoption Convention, an international agreement aimed at safeguarding adoptions. Under the new measures, prospective parents must adopt from agencies certified by the Haitian government’s social welfare agency.

Prior to coming under the convention, Haiti’s lax laws made it easy for children to be smuggled out of the country, an issue that was highlighted soon after the Jan. 12, 2010, earthquake. A Miami Herald/el Nuevo Herald investigation found that in the months after the disaster, more than 7,300 boys and girls were smuggled out of Haiti into the neighboring Dominican Republic by traffickers profiting on the hunger and desperation of Haitian children, and their families.

For additional information on intercountry adoptions in Haiti, visit adoption.state.gov. Any questions related to Haitian adoptions should be directed to AdoptionUSCA@state.gov, 888-407-4747 within the United States, or 202-501-4444 from outside the United States, the embassy said.