Even though Privert becomes Citizen Privert at one second past midnight, his supporters are freezing the National Assembly by withholding a quorum unless they are allowed Privert fanatic Senator Lareche as President and Steven Benoit as Vice-President of the Senate. And they demand prolongation of the Privert Presidency.

And Privert’s people say that should their demands be blocked they will “burn Parliament.”

The situation is dangerously volatile. People are going to die.

This is blackmail that should be rejected, effectively leaving the Nation without a government at midnight.
Privert has promised a Lavalas government and moved aggressively towards this goal in close cooperation with Aristide.
Privert and Aristide used Francois Benoit’s verification committee to derail electoral process with false information.

Time for the Americans to cancel visas PERMANENTLY for all Senators, Deputies, and others who press for a Privert/Lavalas dictatorship.

Time for the Americans to remove Aristide from the equation, even if he is a threat to Hillary Clinton’s presidential campaign, if he releases the truth of his relationship with the Clintons, and others. The Americans have sealed indictments covering Aristide involvement in cocaine traffic into States.

In English history a king asked the question- “Who will rid me of this turbulent priest?” when Beckett threatened his control.

We must now ask this question with regard to Aristide. He was allowed a return to Haiti with the promise he would remain clear of politics. All deals are off as Aristide declares war – again- upon Democracy. 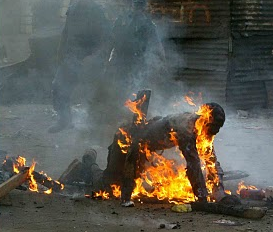