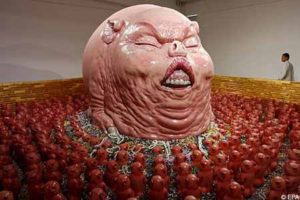 Following the January 12, 2010 earthquake there were problems in the harbor area that prevented normal offloading of containers.

The Preval team rented a large barge at about $7500 per day. This barge would moor against the ship and offload containers onto its deck. The barge would then be moved the 200 feet between boat band dock, where the containers would be lifted ashore.

Although the emergency is over, and the barge no longer required, it remains in service, generating millions, and millions for Preval….and now for his successor Michel Martelly.

Just think, an average container ship with over 5,000 containers.

These $300.00 charges would be enough to fund Martelly’s promised educational program, but that won’t happen.

Greed is Great: There is never enough to satisfy a Haitian politician.