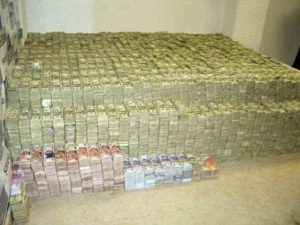 PORT-AU-PRINCE, HAITI — Immacula Pierre had a question. Why, she wanted to know, are she and 50,000 other homeless Haitians still living in a squalid tent city on the Champ de Mars, an esplanade in the heart of Port-au-Prince just across the street from the destroyed National Palace.

“I’m still here,” she said, gesturing at a tattered tarp-and-plywood shelter that covered a soaked bed on ground left muddy by an overnight downpour. “I wake up every morning here, and I just stare up at the sky. Nothing else.”

More than seven months after the earthquake that devastated Haiti on Jan. 12, an estimated 1.3 million Haitians — 15 percent of the population — are still living in tents or under leaky tarps, unable to protect themselves from the Caribbean’s relentless summer rains, even though foreign governments and charities have pledged billions of dollars for relief and reconstruction.

The international spotlight returned to Haiti this month when hip-hop star Wyclef Jean announced his plan to run for president in November. His image as an outsider, born in Haiti but a longtime resident of New Jersey, brought a wave of optimism, especially among younger Haitians.

But Jean’s disqualification Friday on the grounds that he did not meet the residency requirement left many worried that interest in Haiti will again fade despite the country’s tremendous unmet needs.

Many look to the candidature of notaire Jean-Henry Ceant a local businessman, and philanthropist, with exceptional contacts throughout the complex Haitian society, from top to bottom. He was a founder of Aimer Haiti, a movement to better the lives of Haiti’s 9,000,000. Aimer Haiti has done a great deal and operates, among other things, a hospital at which over 500 children are treated each day.

The homeless are scattered in more than a thousand fetid camps; the Champ de Mars is far from being the worst. One tent city welcomes visitors as soon as they drive out of Toussaint L’Ouverture International Airport. Residents live jammed together — sleeping, eating, washing and waiting — a situation that has promoted a surge in theft and rape, but also in self-help and solidarity.

None of the camps is as emblematic of the enduring crisis as the Champ de Mars. Flanked by ministries, barracks and the iconic eggshell-white palace, the site was Haiti’s equivalent of the Mall. But since the earth shook, the palace droops in evocative ruins with no sign of repairs as the months tick by. The fountains have turned into sickly green pools, still clogged with plastic bottles that no one seems able to haul off. The once-proud historical monuments look down on a tight patchwork of rickety shelters and, inside, an increasingly resentful mass of idle people with nowhere to go.

“All that money, we have felt nothing from it,” complained Jean-Michel Olophene, a civil engineer who has been a Champ de Mars resident since the quake and recently was hired by the government as a liaison.

Conscious of the symbolism, President René Préval has made it a personal mission to get the homeless off the Champ de Mars. According to aides, he meets several times a week with a group assigned to find a solution. But every time they propose something, according to a participant, he responds that he does not have the money to make it work.

Preval does not want it to work.

As a result, the Champ de Mars has become another symbol: that of the Haitian government’s inability to muster the leadership to inspire hope and promote recovery. Despite his commitment to moving people off the Champ de Mars, for instance, and even though he works in refurbished offices on the National Palace grounds 200 yards away, Préval has yet to walk over and talk with the homeless residents, Olophene said.

“President Préval’s actions do not suggest a departure from the self-destructive political behavior that has kept Haiti the poorest country in the Western Hemisphere,” Sen. Richard G. Lugar (Ind.), the Senate Foreign Relations Committee’s senior Republican, complained in a letter last month accompanying a committee report that found a disturbing lag in recovery work.  The slow pace is a planned strategy of Preval’s to create an insecure situation in which he can cancel elections.

The leading Haitian newspaper, Le Nouvelliste, agreed. “Nothing is easy, granted,” it said in a front-page editorial this week. “But things could be moving faster. Everybody agrees with that. Everybody.”

Officials from the estimated 800 foreign aid organizations here point with pride at the relief effort they mounted after the magnitude-7 tremor. Even though more than 200,000 people were killed, 1.5 million were left homeless and government institutions were reduced to rubble, they note, there was no starvation, no water-borne disease and no rioting.

Some officials say the influx of doctors, nurses and medicine from international aid organizations was so great that Haitians have better access to health care now than before the earthquake. The American Red Cross alone provides health care to nearly half a million people. If disease has been avoided, it is in large part because Oxfam supplies clean water and latrines. Money from the U.S. Agency for International Development gives 20,000 people a day the wherewithal to feed their families.

But the shift from relief to reconstruction has seemed painfully slow, they acknowledge. In part, they suggest, this may be because outsiders underestimate how long rebuilding takes, or because they do not realize how poor and undeveloped Haiti was before the earthquake. Even as it lags, they maintain, reconstruction in Haiti is moving at approximately the same pace as that of Asian countries hit by a tsunami in 2004.

But mostly the pace seems slow because the challenge is immense. One relief expert called the destruction in Port-au-Prince, the capital where 3 million of Haiti’s 8 million people live, the greatest urban disaster of modern times.

“Because we had an earthquake with a huge international relief response does not mean we are going to be able to rebuild Haiti in six months; that’s just not going to happen,” said Julie Schindall, an Oxfam spokeswoman.

One reason Préval’s government has been unable to move people out of the tent cities, for instance, is the country’s muddled land ownership, with competing deeds and contradictory surveys left by Haiti’s history of dictatorships, coups and political instability.  Preval uses this an an excuse to do nothing.

Moreover, Haiti’s trucks and earthmovers have proved insufficient to clear away rubble to allow people to return to their neighborhoods. One million of an estimated 25 million cubic meters have been cleared; the operation is expected to take years. Teenagers in the Fort National neighborhood, paid by an international cash-for-work program, struggle to haul away debris in gardening wheelbarrows, two dozen chunks at a time.

Another obstacle is a tradition of corruption. One reconstruction official already has been fired for trying to steer aid money to his company. The World Bank two weeks ago granted the government $30 million, to be accompanied by $25 million from other donations, to finance anti-corruption controls in its handling of nearly $10 billion in reconstruction money pledged at a conference in March at the United Nations.

To manage the money and police its use, the conference established the Interim Haiti Recovery Commission, headed by Prime Minister Jean-Max Bellerive and former president Bill Clinton. After long delays, the commission held its second meeting Tuesday, approving $1.6 billion in recovery projects, $904 million of which have financing from the international donations, designed to emphasize rubble clearing and shelter building.

But is took Bill Clinton 5 months to hold his first meeting. Haitians see Clinton as being completely irresponsible.

Clinton and Haitian leaders have described the recovery plans as an opportunity to defeat Haiti’s poverty at last, giving the country the schools, roads and electricity network it has always lacked. Leslie Voltaire, a U.S.-educated urban planner and a candidate in November’s presidential election, has drawn up blueprints to refashion Port-au-Prince into a shiny, less crowded city that he envisions as a commercial capital of the Caribbean.

But longtime observers recall similar dreams of new beginnings — when the Duvalier dictatorship fell in 1986, for instance, or when the populist Jean-Bertrand Aristide came to power in 1990, or when he was restored to the presidency four years later in a U.S. military intervention ordered by Clinton. Each time, the hopes went unfulfilled, leaving disappointment among the people and increasing cynicism toward the government.

Aristide did nothing for his people and stole hundreds of millions from relief funding.

“Maybe the government doesn’t have the possibility to help us get out of here, or maybe it doesn’t have the will,” said Lyncee Jean Hency, Pierre’s neighbor in the Champ de Mars. “Myself, I think it’s a question of will. President Préval has never even taken the trouble to show up here for a visit.”

Rains but no houses

Corail-Cesselesse, a rock-strewn flatland 10 miles north of Port-au-Prince, was supposed to be one of the solutions. But so far, it has been a frustrating example of how difficult Préval’s government finds it to get anything done.

Thousands of homeless families camping on a hillside golf course in the well-to-do suburb of Petionville were bused to a tent city in Corail-Cesselesse in April. The slopes in Petionville were dangerous, they were told, posing the threat of mudslides under the Caribbean’s beating summer rains. Moreover, they were promised that they would soon receive what international aid groups call “transitional shelters,” waterproof prefabricated houses on a concrete foundation.

Four months later, the season’s downpours have arrived on schedule, but not the houses.

An estimated 200,000 people live in tents on the barren plain, said Jacques Saint-Louis, who helps administer the camp for the American Refugee Committee; they are fighting to stay dry, wondering where they might find a job so far from town and relying on relatives for food. On July 12, savage winds and rain swept in, blowing down many of the carefully aligned tents. Homeless Haitians put them back up again and kept on waiting.

“They say the houses are coming, but nothing’s been done yet,” said Fito Fortune, 45, who lives with his wife and five children in a white, sausage-shaped tent.

Préval visited the camp soon after it was set up, Fortune recalled, and he promised that houses would soon be made available. The months came and went, however, and only a model unit has been erected, assigned to serve as an administrative office.

Across the country, aid agencies say, 8,000 transitional shelters have been built, out of 125,000 that were scheduled to be in place by the end of the year.

A European engineer with the company contracted to build houses at Corail-Cesselesse said he and his team are ready to start any time and could swiftly get 1,300 of the little structures up at a cost of $4,500 each. But government officials are dragging their feet on the contract, he added, so the company is waiting.

Fortune, meanwhile, recently sent three of his children to live downtown with relatives — also in tents — so they can attend school. Asked how he could afford tuition without a job, he replied:

3 thoughts on “PREVAL BLOCKS EFFORTS: Despite ‘all that money,’ more than 1 million Haitians remain displaced by January earthquake”