With a 39 percent approval rating, President Michel Martelly’s popularity is dropping. Two polls on Haiti’s Oct. 25 presidential elections give different results on who is leading Haiti’s West Department, which includes Port-au-Prince, will be a tough fight on election day 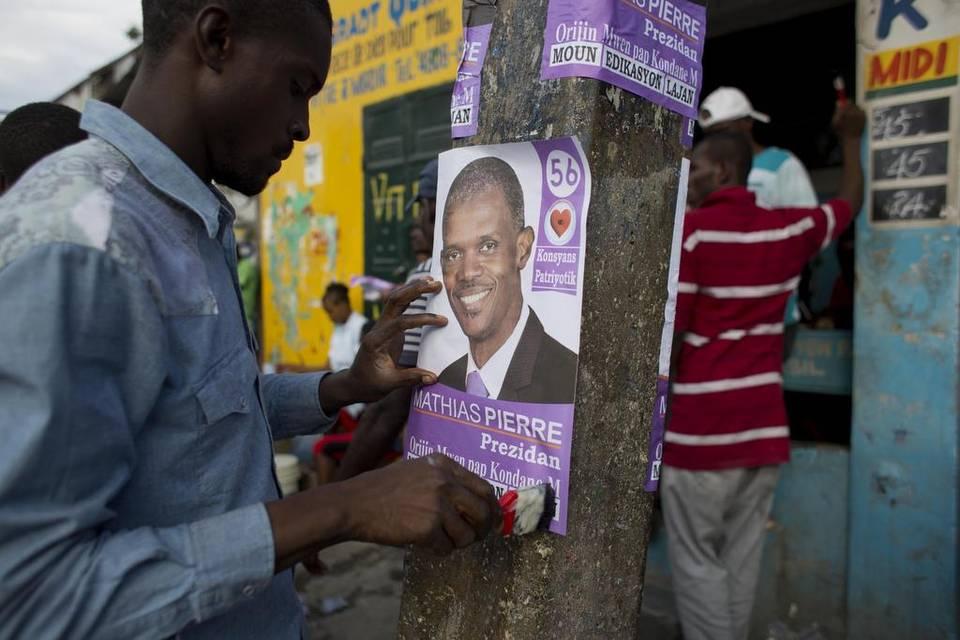 In this Oct. 3, 2015 photo, a man pastes to a pole a campaign poster of presidential candidate Mathias Pierre, in Port-au-Prince, Haiti. Cities and towns across Haiti are plastered with colorful campaign ads, leaving voters struggling to differentiate a swarm of candidates who grin from posters, banners and billboards slapped on nearly everything that doesn’t move and a few that do. In the first round of Haiti’s presidential vote on Oct. 25, voters will choose from a field of 54 candidates. Dieu Nalio Chery AP

jcharles@miamiherald.comOrder Reprint of this Story

Haiti’s upcoming presidential elections — with its cacophony of 54 candidates — is basically down to three main contenders, but there’s ample room for a surprise finisher given the number of still-undecided voters, according to two polls released this week.

However, the polls by Port-au-Prince-based BRIDES and Miami-based Integrated Communications and Research (ICR) disagree about who is in the lead.

Both polls place former senator and outspoken government critic Moise Jean-Charles in third place, with 8.7 percent in the Gamarra survey and 10.7 percent in BRIDES.

These polls are just magical tricks from some not too smart and politically-motivated pollsters.

“We don’t give these polls any importance,” Jean-Charles told the Miami Herald, dismissing the surveys as politically motivated. “Our polling is the people who are in front of us when I ask, ‘who will represent your interests?’ and they say Moise Jean-Charles.”

Haitians in general are skeptical about polling in a country where people aren’t always forthcoming. In the case of the two polls on the Oct. 25 election, observers have raised questions about the secrecy over their funders and their methodologies. There also have been a plethora of fake polls, further fueling skepticism.

In my line of work, polling is fundamental to producing a good strategy to win elections for our candidates.

But polling is fundamental to producing a good strategy to win elections, said Antonio Sola, who is in charge of Jovenel Moise’s campaign.

“Today, he is clearly in first or second place. Some of our results closely resemble the results of the ICR poll,” Sola said.

“What motivates us is our work on the ground and the response of the population in all of the departments that we have visited. The real poll will be on Oct. 25,” he said.

Whether we are first or in some other position, we don’t take any position for or against polls.

Robert Fatton, a Haiti expert at the University of Virginia, said what he finds shocking about the Gamarra poll is how Moise suddenly jumped in front of Celestin, who has been leading in other polls.

“I am not a statistician, but the difference between these two polls is such that it is difficult to accept their scientific value. There is thus something very bizarre in these results,” Fatton said. “One of them must be deeply flawed.”

Gamarra, who said he conducted the poll this month on behalf of an unnamed private-sector client, stands by the results. He does acknowledge that “any polling of this kind has a sampling bias.” For example, randomly sampling 1,362 people via their cellphones means ending up with more urban than rural participants.

Still, the results offered some interesting insights, he noted, including that President Michel Martelly’s popularity is at its lowest level. Martelly, who is backing Moise, faces his toughest critics in the West Department, which encompasses Port-au-Prince, and has the highest rate of dissatisfaction over the direction the country is headed.

Martelly’s 39 percent approval rating and the dissatisfaction in the West Department, could “be a significant electoral problem,” Gamarra said.

“Looking at these numbers, the biggest problems is the West because it has the largest concentration of voters and you have an image problem related to the Aug. 9 elections,” Gamarra said.

But as Haiti is inching closer to the Oct. 25 election, the race is becoming anything but predictable. For example, last week, in a surprise move, former presidential candidate and Texas businessman Dumarsais Siméus joined Jean-Charles’s campaign. Also the high numbers of “I don’t knows” — 34.4 percent in Gamarra’s poll compared to 13.5 percent in BRIDES,’ which questioned 12,263 participants, means someone not far behind can quickly move up.

“The national and regional levels of voting participation will have a significant impact on the final results. High or relatively high voting rates would, I think, make the results unpredictable,” Fatton said. “A low voting rate would clearly favor the so-called top contenders.

“All of this assumes a relatively free and fair election and an honest counting of the vote; as we know, unfortunately, such assumptions are at best wishful thinking given the history of past elections,” he said.

One must recall the time, during the last election cycle, when a candidate paid BRIDE to be at the top of the poll. His prices was $40,000. When the poll came out, and he was number 2, he called the BRIDE person to complain.

The candidate was told the “someone else paid more, and got number 1.”

BRIDE polls are not real.

Haitian polls are not real.

Haitians are so paranoid that they would never tell a stranger where their vote will go.

I can remember an appearance of Charlito Baker at Croix des Bouquets. A couple of thousand people were cheering Baker. Some kids were standing next to us an answered our question;
“Who are your parents voting for?”

“Preval.” was their answer as they also cheered for Baker. At the moment, Baker was handing out T-shirts and some food.