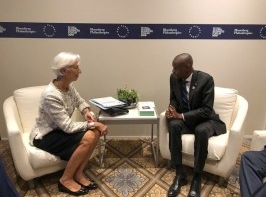 Wednesday in New York, on the sidelines of the 73rd Ordinary Session of the United Nations General Assembly President Jovenel Moïse, met privately with Christine Lagarde, the Director General of the International Monetary Fund (IMF) to review the status of the Staff Monitored Program (SMP) adopted last February by Haiti and the IMF .

The President, referring to serious incidents from 6 to 8 July, following the adjustment of fuel prices, emphasized the need to implement an emergency social program to meet the needs of the population, especially the most vulnerable citizens.

He reiterated his vision that at the same time, it is essential to execute the government’s development plan, in the medium and long term, to establish Haiti’s sustainable development policy. In addition, it considered it imperative that the IMF and Haiti’s technical and financial partners adjust their development support program to make them more flexible, more effective and better aligned with the priorities of its Administration.

Christine Lagarde expressed her full support for the development policy of the Government of Haiti, while emphasizing the full understanding of the institution on the just demands of the Haitian people “You have my full support and that of the IMF. We appreciate your courage […] The IMF encourages you to continue to implement your priorities, while emphasizing the safety net. We congratulate you for your fight against extra billing and better profitability of State resources. We learned from the incidents in early July. That’s why we think that it will be necessary to act gradually by applying tax reforms. It is important to continue the reform of the state.”