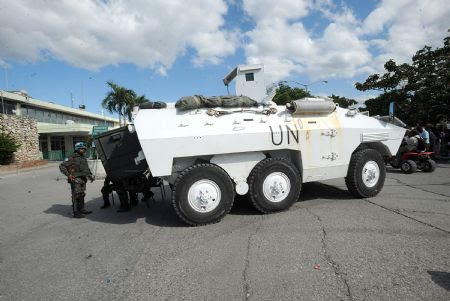 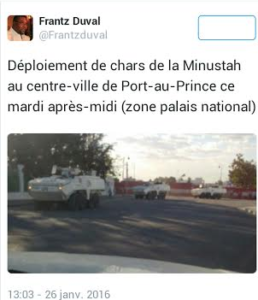 An impasse that led Haiti to suspend elections indefinitely could undermine efforts to reduce poverty and shore up democracy unless a solution is found soon, according to the chief of the U.N. stabilization mission in Haiti.

Sandra Honore, the top United Nations envoy to Haiti, told The Associated Press that it’s important for the suspended electoral cycle to be resolved as quickly as possible “given the tense moments that the country is living right now.” For 12 years, the world body has kept a mission in Haiti designed to focus on security and stability.

“I would hope that reason will prevail and that the best possible solution will be arrived at to prevent the country from regressing,” she told AP in a Tuesday interview at the headquarters of the U.N. mission.

A presidential and legislative runoff was called off less than 48 hours before the Jan. 24 vote was set to begin amid a surge of violent protests and deep suspicion that a first round was rigged in favor of the ruling party’s presidential candidate.

Outgoing President Michel Martelly is scheduled to step down Feb. 7, threatening to leave a political vacuum.

For days, Haiti’s political leaders and others with influence have been working to find a solution to the crisis.

Martelly has asked the Organization of American States to send a mission to help Haitians reach agreement, and he has also asked several sectors to pick members for a new Provisional Electoral Council, which oversees the country’s election process.

The protests that flared in the capital last week have died down, though some pro-government demonstrations have taken place outside the capital.

Honore called on political actors to publicly repudiate violence in Haiti, the hemisphere’s poorest country and one of the most unequal in the world.

“In order to attract investment, in order to be able to create more jobs, which the country desperately needs, these acts of violence and acts of intimidation only serve to deter” investment in Haiti, she said.

The U.N. mission, largely made up of a foreign force of troops and police, has been in Haiti since the chaos following a 2004 rebellion that ousted President Jean-Bertrand Aristide from power.

The mission is deeply unpopular with many Haitians. Scientific papers have suggested there is ample evidence to show that U.N. peacekeepers from Nepal inadvertently brought cholera to Haiti after human waste was dumped in the country’s biggest river, some 10 months after a January 2010 earthquake devastated much of Port-au-Prince and surrounding areas.

MINUSTAH  could have prevented the recent melt-down by doing its job, instead of acting like tourists.

Honere should have deployed it armored vehicles and troops around the Nation, preventing the violence that resulted after President Martelly’s speech to Haitians.

All further non-approved manifestations should be barred.

Martelly needs everyone’s support to facilitate a smooth entry of a new President.