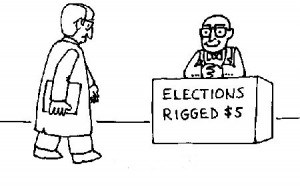 PORT-AU-PRINCE, Haiti (sentinel.ht) – Some fifty of the more than 120 political parties and groups registered with the Provisional Electoral Council (CEP) of Pierre Louis Opont attended the working meeting Friday where the embattled institution hoped to announce measures that would restore confidence in the electoral process.

Of the organizations that did attend the September 18, 2015 meeting at the Ritz Kinam II Hotel and Conference Center, a significant portion only presented themselves to heckle and demonstrate for the resignation of Pierre Louis Opont and members of the CEP.

No declaration, much less an agreement or resolution, was made following the meeting. Presidential Adviser and candidate for the Senate, Youri Latortue, said that another meeting would be held soon. No announcement towards that end has been made since.

The majority of political parties and candidates have established collectives aimed at achieving the resignation of CEP President Pierre Louis Opont. A growing segment are calling for the resignation of the entire CEP and the establishment of a provisional government in order to organize fair and credible elections in Haiti.

The United States and others in the international community provided $38 million [US] to the CEP to organize the August 9, 2015 events given for elections. This amount is more than four times the amount spent by nations of similar to greater populations and circumstances.

Despite an abysmal 18% voter turn out claimed by the CEP, that local and international observers estimate to be really at 4-5%, final results from the August 9 events have still not been made public.