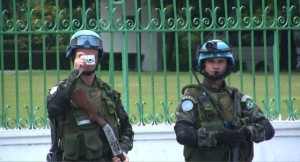 Is there a culture of impunity in Haiti’s long-running MINUSTAH operation? Hannah Armstrong explores the vulnerability of populations under peacekeeping mandate.

UNTIL recently, the National Museum in Phnom Penh featured a wax sculpture of a UN peacekeeper, wearing the iconic blue beret, with his arm around the throat of a downcast Cambodian prostitute. It is an image in striking contrast to the UN’s preferred self-depiction,  exemplified by an image of a meek-looking peacekeeper cooking for Darfur refugees on the newly-launched UN Conduct and Discipline Unit website.

The new millennium witnessed a surge in peacekeeping missions. Nine were launched between 2002 and 2007, and the 2010-2011 budget totalled US$7.83 billion. But it has also brought a crescendo of complaints regarding peacekeeper delinquency and immunity to prosecution that highlights the acute vulnerability of populations under peacekeeping mandate.

Some of the worst examples have been in Haiti. A cholera epidemic that killed more than 5,500 Haitians and infected at least 300,000 has been convincingly linked to a Nepalese battalion of the UN Mission to Stabilise Haiti (known by its French acronym of MINUSTAH). New evidence published in the July issue of Emerging Infectious Diseases presents the strongest case yet that contamination of the Artibonite River was caused by poor sanitation at a MINUSTAH camp. This is merely the latest in a string of scandals that have dogged the mission since it begain in 2004. Aside from allegations of run-of-the-mill kickbacks and corruption, members of the Haiti mission have been accused of multiple sex crimes against children. The UN expelled more than 100 Sri Lankan peacekeepers after charges of underage prostitution could no longer be ignored.

Allegations of sexual exploitation of local women and children are common enough among modern military operations. They clash with liberal narratives of peacekeeping presented by Western institutions.

Contemporary peacekeeping operations have many dimensions. They are meant, according to the UN, not only to maintain peace and security, but also to “facilitate the political process, protect civilians, assist in the disarmament, demobilization and reintegration of former combatants; support the organization of elections, protect and promote human rights and assist in restoring the rule of law.” These tasks entail monitoring and “rehabilitating” post-conflict populations to promote security and democracy. A number of academics have argued that these therapeutic depictions of peacekeeping are misleading, and actually help to rationalise coercive international intervention.

Carol Harrington, for instance, has argued that the rise of peacekeeping operations programmes in the “new wars” environment of the past two decades has served to “re-make individuals in post-conflict populations according to liberal norms set by the ‘international community’ and give credibility to narratives of violent liberal intervention.”

“The picture that emerges when peacekeepers are monitored by the same criteria as the locals is deeply disturbing for peacekeeping projects,” she writes.

And yet, measures to prosecute criminality among peacekeepers are minimal at best. Many feel that UN inactivity and blame-shifting add to a culture of impunity within peacekeeping missions. A UN panel sidestepped the role of peacekeepers in introducing cholera in Haiti, choosing to focus instead on local conditions such as poor access to healthcare that widened the scope of the outbreak. “It’s like blaming a building for catching fire to take pressure off the guy who dropped the match,” tweeted AP Haiti correspondent Jonathan Katz at the time.

“There is strong sentiment that the UN has failed to take responsibility for [its] role in the introduction of cholera into Haiti, and that the UN and MINUSTAH behave as an arrogant supranational organisation without the responsibilities of a sovereign state,” said a senior Western aid official in Port au Prince, where street graffiti commonly denounced the UN “occupayson” well before the disease outbreak.
Peacekeeper impunity is often institutionalised by loopholes in international law. Status of forces agreements (SOFA) signed by the UN and host countries effectively waive all criminal and civil liability, erecting “a big barrier to accountability for UN members, especially military” according to Nicole Philips, staff attorney with the Boston-based Institute for Justice and Democracy in Haiti. This means that Haitians cannot file charges against the Sri Lankans who hired underage sex workers in Haiti while working as UN representatives, as they are not subject to host country jurisdiction.

“The SOFA’s lack of any real accountability for civil or criminal human rights violations of MINUSTAH members breaches the occupied country’s sovereignty,” said Philips. (You can read the IJDH’s report here). There is no evidence that the expelled Sri Lankan peacekeepers were ever prosecuted for their crimes back home.

Finally, MINUSTAH is the only Chapter VII deployment occurring in a country with no active conflict or civil war. A Chapter VII mission authorises peacekeepers to use force for reasons other than self-defence. “MINUSTAH troops patrol Haitian streets in tanks with their weapons drawn at unarmed civilians,” said Philips. And yet, “Haiti has had a democratically elected government since 2006 and has experienced no acts of aggression that threaten its peace and stability or that of its neighbors.”

The wax sculpture was eventually removed from the Phnom Penh historical museum, and it appears that no charges have been brought against the alleged sex offenders who served in Haiti. But if history has a habit of erasing the outward signs of peacekeeper misconduct, marks of abuse are surely engraved in popular memory.

Hannah Armstrong is a freelance foreign correspondent currently based in London. Her reporting has appeared in the Financial Times, Foreign Policy, the Christian Science Monitor, CNN and Africa Investor.