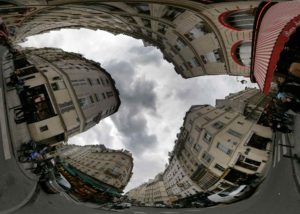 Among Haiti s curses in recent decades is the roster of scoundrels, tyrants, charlatans, opportunists and
blowhards who have inhabited the gleaming white presidential palace (now destroyed by earthquake) in downtown Port-au-Prince. This hall of shame

includes  an oratorically gifted shantytown populist, the Rev. Jean-Bertrand Aristide, whose mercurial tenure ended in exile – amid reports of murder and drug trafficking at the highest levels of government.

It remains to be seen whether Haiti s new apparent president-elect will offer an improvement. Michel Martelly, a bawdy carnival singer whose act once
featured mooning the audience, is a popular entertainer who went by the stage name Sweet Micky. With a past that includes crack cocaine use and foreclosed homes in Florida, Martelly, who is 50, has no experience managing anything larger than his band. Still, he managed to defeat his opponent, a former first lady, by a 2-to-1 margin.

Haiti, beset by disasters natural and man-made, will need much more than bread and circuses to regain its footing. Hundreds of millions of dollars in foreign assistance was pledged after the January 2010 earthquake, but its delivery and effective use depend on open, accountable and steady leadership that will convince donors that their aid will not go to waste.

There is so much at stake. Hundreds of thousands of Haitians who lost their homes in the temblor remain in tents. Staggering mountains of rubble still clog Port-au-Prince. The country s education system, glaringly inadequate even before the quake destroyed many schools, is a mess. Huge numbers of people lack jobs or any prospect of steady income. Public health standards are among the lowest in the hemisphere, a point driven home by a cholera epidemic that has killed 4,600 people and infected 250,000 since it struck last fall. It is expected to afflict hundreds of thousands more, a far worse outbreak than officials initially believed.

If the preliminary election results are confirmed, Martelly will confront all that and more. He has been fuzzy about his intentions, though he has spoken vaguely about providing free education to more children, improving health care and reviving agriculture. Worryingly, though, Martelly has signaled that he would reconstitute Haiti s army – abolished by Aristide two decades ago – though his purpose is unclear; when it was around, the army was known more for brutalizing Haitians than for securing the borders.

In fairness, Martelly, once notorious for donning dresses and diapers on stage, seems to have
cleaned up his act lately. And if his insurgent campaign represents a challenge to Haiti s
traditional political elite, that is not a bad thing; the elite have delivered precious little in the way of opportunity and sound governance to ordinary Haitians.

There have been so many moments of hope in Haiti- hope that it will manage to overcome a legacy of terrible leadership, environmental catastrophe, natural calamity and crippling poverty. This is another of those moments. Martelly, however unlikely a figure he may seem to outsiders, must now render the performance of his life.

I am pleased to see that the world media is not sniping at Martelly for his colorful entertainment career, or some of his earlier peccadilloes.

Everything starts from today, and Haiti’s very survival depends upon Martelly’s ability to pull the diverse elements together, into some sort of cooperative team.

He will also have to rein in MINUSTAH and reclaim Haiti’s sovereignty, sold cheaply by Rene Preval in return for carte blanche to steal..

He has already welded the Mob into a coherent force – even momentarily – and can cultivate their ongoing support by producing results. They don’t expect much and will know if he is really trying. That is all they ask for.

My money is on Martelly – and Haiti.

I think he can do it with the quality people he has behind him.

12 thoughts on “Our View: Sweet Micky takes the stage in hard-hit Haiti-Added COMMENTARY By Haitian-Truth”