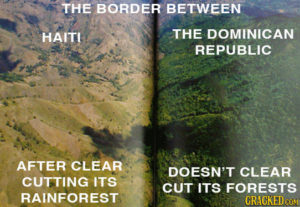 Every day, come rain or shine, Yvon Elie checks on the tens of thousands of seedlings that hope to herald a greener future for Haiti, a once-verdant land stripped bare by deforestation.

“Here we have 60,000 pine saplings, as well as coffee plants and fruit trees like avocado and peach,” the agronomist says proudly of the lush green nursery situated some 2,000 meters (6,500 feet) above sea level.

Elie is with the Seguin Foundation that, since 2004, has been fighting deforestation in La Visite National Park, where families needing to put food on the table have been ruining the topsoil through unchecked farming.

Once touted as a green gem by Christopher Columbus, Haiti—the poorest country in the Americas that is still struggling to recover from a devastating 2010 earthquake—has lost more than 98 percent of its original green cover.

Deforestation was rampant in the second half of the 20th century. La Visite park is home to some of the country’s last remaining cloud forests. The site is also, crucially, a watershed that supplies three or four million people down the mountainside.

Located some 25 kilometers (15 miles) south of the capital Port-au-Prince, La Visite was hard hit from the 1960s onwards when the state allowed three sawmills to be set up there.

“The exploited areas were never reforested,” Elie says, gesturing at a backdrop of bare mountainside.

Logging concessions were doled out and reclaimed at will by the ruling Duvalier clan, as it rewarded friends and punished foes. The Duvaliers long perceived Haiti’s forests as a potential shelter for opponents of their regime, giving them little incentive to protect the woodlands.

“The last sawmill closed in 1980 but the state did nothing for the families of the 83 workers left behind. To survive, they had no choice but to farm the land,” Elie explains.

All that land lying fallow soon attracted others in need, and today the park is farmed by some 800 settler families who plant carrots, leeks, onions and beets—living hand to mouth, and worsening the land erosion in the process.

Peasant families themselves are the first victims of the soil’s degradation, which threatens their livelihood while exacerbating the risk of flooding and landslides for those living below. A worker in the nursery of the Fondation Seguin in La Visite National Park on September 2, 2015

“Water no longer penetrates the earth, the topsoil and seeds just wash away: all that’s left is rock,” says an elderly woman known as “Ti machan”—little trader in the Creole language—as she plants leeks on the small patch outside her home.

Once a week, she treks 15 kilometers along rocky tracks, before riding another 10 kilometers by truck to sell her meager crop in Port-au-Prince.

“At the market I earn just enough to buy more seeds and to feed my grandchildren,” says the 60-year-old, who shares her home with eight family members.

As the land is eroded, small-scale farmers are driven ever deeper into the forest. And every day, more trees are destroyed.

On a tour of the forest area, Elie surveys the latest damage.

“First, people strip off the lightwood to use as kindling. It fetches a good price in Port-au-Prince. The trees then topple over with the slightest wind. And people move in to grow food on the land,” he explains.

Winthrop Attie—or Winnie as he is known—helped to set up the Seguin Foundation a decade ago. Asked who is responsible for felling the park’s trees, he blames the miserable living conditions in Haiti.

“People wouldn’t do this if they had a choice,” he says.

“Our work is about raising awareness,” Elie explains as he greets a farmer tilling land in a pine clearing. The Seguin Foundation’s message is all about sustainable land use, convincing farmers to protect the forest rather than damage it. But it knows there is a limit to what it can achieve.

“It’s dangerous to try to force things here,” Elie says. In 2012, police tried to expel a group of settler families from the reserve. Four people were killed after the operation turned nasty, with police opening fire on stone-throwing residents.

And so the vicious circle continues. Poor rainfall has caused crops to fail for the past two years. And the destruction to trees has been all the greater.

In 2013, Haiti’s environment ministry hired some 30 forest rangers. Today there are just six left in the job, tasked with protecting 12,000 hectares (29,650 acres) of parkland.

For Attie, there is a need for urgent action. Once a week ‘Ti Machan’ treks 15 km along rocky tracks, before riding another 10 km by truck to sell her meager crop

“What worries us the most is the water situation,” he says.

“The park is the water reserve for two whole departments,” he explains. “That represents almost half the population of Haiti.” A woman works in her field planting leeks, carrots and corn in La Visite National Park

And the forest’s 70 known springs are drying up year by year.

“What are we going to do? Import water? The country cannot afford to lose this resource,” Attie warns. The nursery of Fondation Seguin in La Visite National Park

The Martelly had $5,000,000 for aerial reforestation and they gave this money to a known thief who knew absolutely nothing about such a project. Ligonde was the one who stole $2,500,000 from the Catholic Church, then fled to Boston. He returned after the earthquake to steal more.

Haiti had the pioneer of this concept, but this talent was ignored.