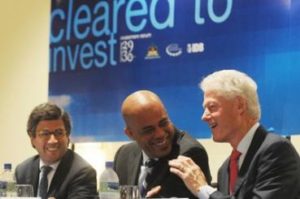 WASHINGTON — Saying relief for earthquake-devastated Haiti must be a “top priority” for U.S. government agencies, President Barack Obama announced Thursday additional U.S. search and rescue teams and critical supplies are on the way to the Caribbean nation.

Flanked by members of the Cabinet at the White House, Obama also announced an immediate investment of $100 million in the recovery effort for Haiti, where the death toll may top 100,000.

The first waves of U.S. rescue and relief workers are on the ground in Haiti now, Obama said.

Tuesday’s 7.0-magnitude quake — the first to hit Haiti in more than two centuries — destroyed thousands of buildings, including the presidential palace, and knocked out telephone service and electricity.

Visit MarketWatch on the Web at http://www.marketwatch.com

Obama can suggest but the idea will be shot down in Congress and Obama can shrug, and get the credit for the suggestion. Haiti will get nothing.