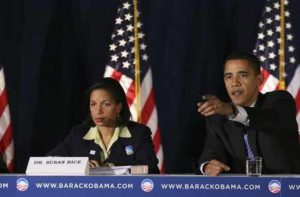 US warns Haiti over election changes

UNITED NATIONS — The United States warned Haiti on Thursday that it would lose international support if it rejects calls for President Rene Preval’s favored candidate to be taken out of an election runoff.

The US ambassador to the United Nations, Susan Rice, also expressed concern over the “unpredictable impact” of the return of Jean-Claude “Baby Doc” Duvalier on the political turmoil in the Caribbean nation.

Rice told a Security Council debate that Haiti must have a “legitimate” government and that authorities must carry out the recommendations made by the Organization of American States (OAS).

OAS monitors said the November 28 presidential vote was riddled with irregularities and fraud and that Preval’s handpicked candidate, Jude Celestin, should be eliminated from the runoff vote.

“Sustained support from the international community, including the United States, will require a credible process that represents the will of the Haitian people,” Rice told a UN Security Council debate on Haiti.

“We urge the Haitian authorities to outline a very clear way forward that will lead promptly to the inauguration of a legitimate and democratically elected government,” she said.

Le Roy said he expected an official announcement on the first round results on January 31 and a second round vote around mid-February.

Haiti’s election commission said on Wednesday that it will only change the two candidates in the runoff on the basis of valid legal complaints, which must be filed by Friday.

“We urge the Provisional Electoral Council to implement the OAS recommendations,” Rice said, also calling for a “timely” timetable for the second round and inauguration of a new government.

Rice also highlighted US concern over the presence of former strongman president Duvalier in Haiti.

“Given the continuing turmoil surrounding the November 28 election, the United States is concerned about the unpredictable impact that Duvalier’s return may have on Haiti’s political situation,” said Rice.

“My government is clear about Duvalier’s notorious record of human rights abuses and corruption,” she told the UN council.

Rice is a moron and believes the Haitians are also morons.

She speaks of Duvalier, without seeking the real, not the media-created TRUTH. Even as she mouths these programmed Truths, she ignored the Corruption and horrendous human rights violation of the Aristide/Preval eras.

And now she insists that the Haitian people accept the OAS’ biased demands that their recommendations be accepted OR ELSE.

Even as the Obama/Clinton team insist that the election must reflect the wishes of the people Ambassador rice ignores the fact that MIRLANDE MANIGAT IS NOT THE PEOPLE’S CHOICE!! JEAN HENRY CEANT WAS BUT THE BALLOT WAS FLAWED FROM THE FIRST MINUTES AND THE OPPOSITION WALKED AWAY SHORTLY AFTER 10 A.M.

If Rice decides to ignore the facts there is little that can be done.

She will still have three meals per day, warm showers, fresh water, and a chauffer driven limo.

She will find, for the first time I have seen, the Haitian people will stand up and say “enough is enough”!!! Paul Denis, Haiti’s Minister of Justice attacked the American Ambassador, and Hillary Clinton/Obama in a highly un-Haitian way.