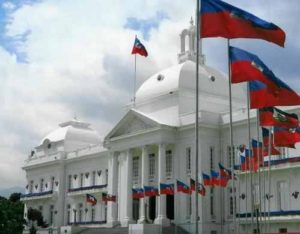 A smiling President Michel Martelly, wearing the red and blue symbol of transfer of power, the presidential sash, walked out of a temporarily white parliament building smiling, and holding his wife’s right hand.

Moments earlier, her husband, musician-turned-politician Martelly was sworn in as this quake-ravaged nation’s 56th president. He took the oath of office in darkness. As he was sitting down next to former President Rene Preval, the lights went out.

“Personally I’m very happy for Haiti, and I hope we can have some reconciliation,” going forward.

“The new president has generated energy, optimism. There is really a lot of hope for this new mandate that we can see progress and finally projects of reconstruction taking place” Azua said.

Gracia Delva, another well-known Haitian musician who was recently elected to the chamber of deputies, agreed. “Martelly’s campaign was rich with promises, and we hope he can realize them all,” he told The Miami Herald.