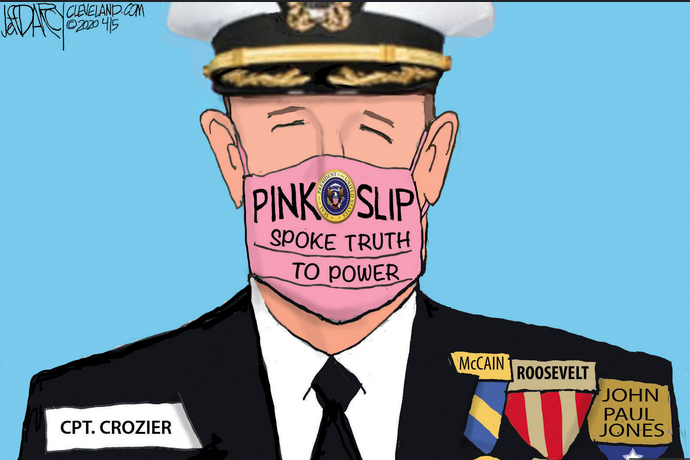 I am certain Brett Crozier will be found to have acted honorably, with the best intentions for his ship, his crew and his Navy foremost in his heart.

The acting Secretary of the Navy, Thomas Modly, last week relieved my Naval Academy classmate and personal friend Brett Crozier from his position as commanding officer of the USS Theodore Roosevelt. On Monday, the secretary was recorded telling the crew of that ship that Capt. Crozier was either “too naïve or too stupid” to be in command. During his speech on the ship’s public address system, he repeated the false narrative that Crozier himself may have leaked a letter he wrote pleading for help amid a wave of coronavirus cases on his vessel.

It is not for me to address the actions that Capt. Crozier took, or the decisions he made in attempting to halt the rapid and unprecedented spread of COVID-19 among the crew on the densely packed warship. The Navy will have an investigation, the facts will be established, and eventually the public will know the details behind this incident.

However, I will say that in the course of knowing Brett over 32 years, I have never known a more calm, centered, positive leader. We first met as plebes with freshly shorn heads in the sweltering summer of 1988. We spent the next four years together in the same company of 35 midshipmen. We were roommates in flight school, and we have stayed in touch over the decades.

As a carrier aviator with more than 500 arrested landings and multiple deployments over the course of 11 years of active service, I am intimately familiar with the intense environment aboard a nuclear aircraft carrier. I have zero doubt that Brett did exactly what was necessary to communicate the facts of a difficult situation to the chain of command, and that he did it by the book. Having observed his character closely under intense pressure, over the course of decades, I do not believe for a moment that he “panicked” or let himself be ruled by emotions.

The actions and behavior of the acting secretary during this situation only served to undermine his own credibility. He in fact displayed the very emotional response that he cited as a cause to relieve Capt. Crozier. Sadly, the public display revealed a man not suited to hold the office that he does, however temporarily, occupy. And it was indeed temporary. By Tuesday, Modly was out.

In his April 4 press conference announcing the decision on Crozier, Acting Secretary Modly noted that the leaked letter was published in Crozier’s “hometown newspaper” (The San Francisco Chronicle, over 50 miles from Crozier’s native Santa Rosa). The insinuation was clear and dishonorable, a blatant attempt to assassinate a man’s character without facts to support it. He later apologized and admitted that he does not know who leaked the letter — that we may never know. 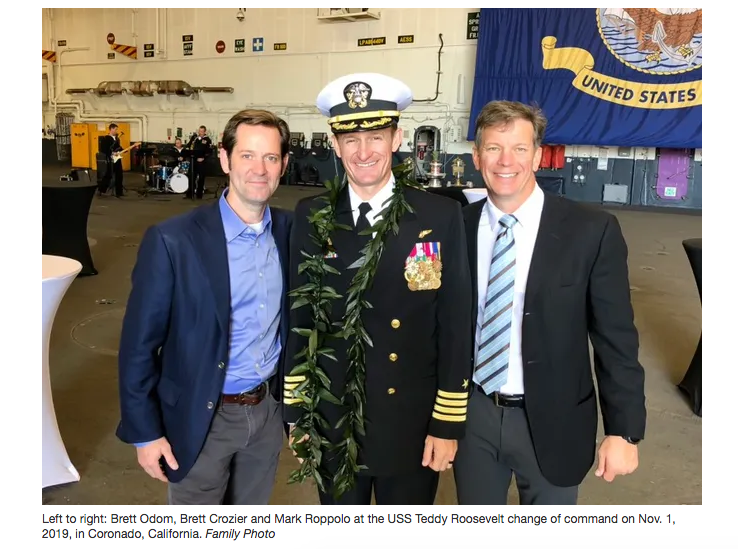 The acting secretary repeated the same insinuation to the ship’s crew, boldly stating over the loudspeaker that “there is never a situation in which you should consider the media a part of your chain of command” and suggesting Crozier was the source of the leak. Perhaps the acting secretary believed that in Guam, on the ship, he would avoid the sort of questions and scrutiny that led to him to backtrack on that same assertion in his press conference. If so, one need only look to his own words to arrive at a judgment: “If he didn’t think…that this information was going to get out into the public…then he was either too naïve or too stupid…”

The acting secretary has no idea who leaked the letter. If he did have facts, we would know this. Throughout this situation he has displayed a telltale pattern: He makes a strong categorical statement that portrays Crozier in the most negative light, only to walk it back to more general terrain under questioning. For example, after accusing Capt. Crozier of going outside his chain of command in his Pentagon press conference Thursday, he was then forced to admit that yes, the memo had been sent to the CO’s chain of command. This led to the absurdity of an incredulous reporter asking, “Is he being relieved because he cc’d too many people?”

Commend Crozier, don’t ax him:A Navy captain tries to save his sailors, and gets fired in the process

Finally, the acting secretary was well aware that Capt. Crozier is unable to speak out on his own behalf. As a uniformed service member, he is of course prohibited from speaking to the press about this incident — much less responding publicly to a superior in his chain of command. Moreover, I know that Brett would never consider that course of action; it is simply not in his character. He is an honorable man who has put the Navy and its core values at the center of his life for over three decades, at great personal sacrifice to him and his family. I know that he is at peace with the actions he took and will wait for the investigatory process to run its course.

Given that constraint, the acting secretary’s public comments were all the more shocking and disgraceful. It is one thing to speak to the public about the facts and decisions leading to a dismissal. It is another entirely to make statements to the crew and the public that defame the character of a good man who has no opportunity to defend himself.

The mission of the United States Naval Academy, which Acting Secretary Modly, Captain Crozier, and I all attended, is “To develop Midshipmen morally, mentally and physically and to imbue them with the highest ideals of duty, honor and loyalty in order to graduate leaders who are dedicated to a career of naval service and have potential for future development in mind and character to assume the highest responsibilities of command, citizenship and government.”

Brett Crozier exemplifies these ideals. However the Navy ultimately adjudicates his decisions and actions in the face of an unprecedented situation, I am certain that he will be found to have acted honorably, and with the best intentions for his ship, his crew, and his Navy foremost in his heart. Sadly, I do not believe that history will judge Acting Secretary Modly’s behavior in anything like that same light.

Brett Odom is a 1992 graduate of the United States Naval Academy and a graduate of Harvard Business School and the Navy Fighter Weapons School (TOPGUN). He served on active duty as a Naval Aviator flying the F/A-18 Hornet for 11 years, with multiple deployments at sea including combat operations in Operation Southern Watch and Operation Iraqi Freedom.