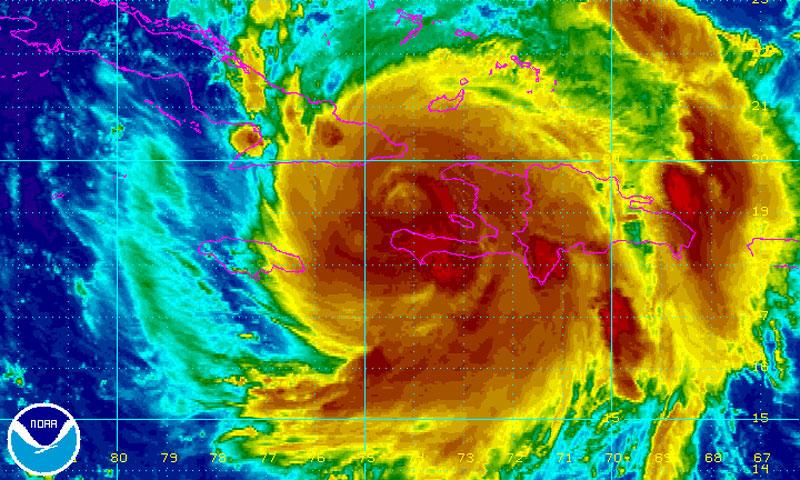 This image shows the town of Les Cayes, Haiti. The first, greener image, was acquired Sept. 26, 2016, while the second image was taken Oct. 12, 2016 – after Hurricane Matthew ravaged the town.  (NASA)

When those images are paired with photos of the same areas taken before the hurricane, the differences become even more obvious.

Large hurricanes have the power to change landscapes forever, and nowhere is that more true than in Haiti following Hurricane Matthew.

The tropical cyclone came ashore in Haiti as a Category 4 hurricane, wiping out virtually everything in its path, especially along the coast. NASA recently released three before-and-after images of different areas along Haiti’s coast that were hit hard by the storm. In each photo, you get a view of how much devastation Matthew caused to the developing nation.

In the image above, NASA’s pictures illustrated the damage to the town of Les Cayes and surrounding areas. In one picture, it’s clear to see the green vegetation surrounding the town. But in the second image, crops and other green spaces are wiped out from the storm’s strong winds and flooding.

In the town of Nan Fort, the story is very much the same. The first image, taken in late September, shows a dry coastline and homes that are still intact. In the second image, the entire coastline is flooded and most of the homes are destroyed.

Finally, in a side-by-side photo, it’s possible to see the swollen Cavaillon River and lots of sediment dumping into Flammants Bay after the hurricane has passed.

Typically, this is seen in the aftermath of a tropical storm or hurricane as floodwaters move toward the coast, taking debris and other objects out to sea.

(NASA)The images were captured by the Operational Land Imager aboard the Landsat 8 satellite.

“You can see from the change in ocean color that a significant amount of debris has been washed away,” University of Oxford ecosystem scientist Alexandra Morel told NASA. “I would conjecture that a good amount of topsoil, which Haitian farmers can’t really afford to lose, is likely a large contributor to that.”