The presidential palace in Port-au- Prince was reduced to ruins in the earthquake. (Lisandro Suero, AFP/Getty Images)

PORT-AU-PRINCE, Haiti — The capital largely has been destroyed in the most powerful earthquake to hit the country in about 240 years.
Associated Press journalists described severe and widespread casualties after a tour of streets where blood and bodies could be seen.

The 7.0-magnitude quake struck at 4:53 p.m. Tuesday, leaving large numbers of people missing.
Communications were widely disrupted, making it impossible to get a full picture of damage as powerful aftershocks shook a desperately poor nation where many buildings are flimsy. Electricity was out in some places.

Karel Zelenka, a Catholic Relief Services representative in Port-au- Prince, told U.S. colleagues before phone service failed that “there must be thousands of people dead,” according to spokeswoman Sara Fajardo.

“He reported that it was just total disaster and chaos, that there were clouds of dust surrounding Port-au- Prince,” Fajardo said from the group’s offices in Maryland.

State Department spokesman P.J. Crowley said in Washington that embassy personnel “reported structures down. They reported a lot of walls down. They did see a number of bodies in the street and on the sidewalk that had been hit by debris. So clearly, there’s going to be serious loss of life in this.”

An Associated Press videographer saw the wrecked hospital in Petionville, a hillside Port-au-Prince district that is home to many diplomats and wealthy Haitians, as well as many poor people.

The U.N. peacekeeping mission’s  headquarters fell and a large number of UN members are unaccounted for.

Alain Le Roy told reporters that U.N. troops, mostly from Brazil, were surrounding the wreckage of the five-story building trying to rescue people, but “as we speak no one has been rescued from this main headquarters.”

Elsewhere in the capital, a U.S. government official reported seeing houses that had tumbled into a ravine.

“The only things that have been reliable has been Twitter and Facebook, the social-networking sites,” she said. “A few of our board members have satellite phones, but there aren’t that many satellite phones in Haiti.

Kenson Calixte of Boston spoke to an uncle and a cousin in Port-au- Prince by phone shortly after the quake. He could hear screaming in the background as his relatives described a frantic scene in the streets. His uncle said a small hotel near their home had collapsed with people inside.
“They told me it was total chaos, a lot of devastation,” Calixte said.

Envoy loses contact
Haiti’s ambassador to the U.S., Raymond Joseph, said from his Washington office that he spoke to President Rene Preval’s chief of staff, Fritz Longchamp, just after the quake hit. He said Longchamp told him that “buildings were crumbling right and left” near the national palace. He had not been able to get through by phone to Haiti since.

The earthquake had a preliminary magnitude of 7.0 and was centered about 10 miles west of Port-au-Prince at a depth of 5 miles, the U.S. Geological Survey said. USGS geophysicist Kristin Marano called it the strongest earthquake since 1770 in what is now Haiti. In 1946, a magnitude-8.1 quake struck the Dominican Republic and also shook Haiti, producing a tsunami that killed 1,790 people.

Most of Haiti’s 9 million people are desperately poor, and after years of political instability, the nation has no real construction standards. In November 2008, following the collapse of a school in Petionville, the mayor of Port-au- Prince estimated that 60 percent of the buildings were shoddily built and unsafe in normal circumstances.

Hotline for family
The State Department has set up a hotline for Americans seeking information about family members in Haiti. The toll-free number is 888-407-4747. Some callers may receive a recording because of heavy call volume. Meanwhile, aid agencies, including the Red Cross, are mobilizing to move aid and rescuers to Haiti as quickly as possible. The Associated Press

Aftershocks keep hitting still, into the morning of the 13th 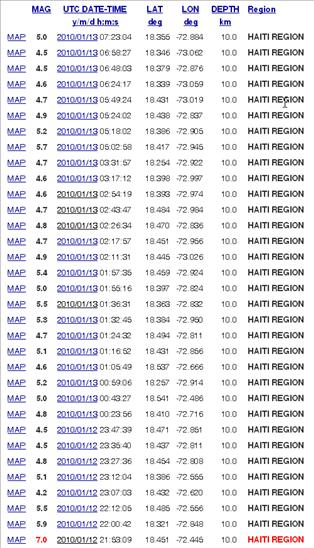