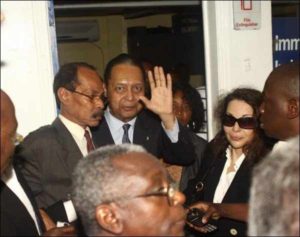 The old Haitian proverb – “Behind the mountain is another mountain”… might be applicable here.

What were Preval’s motives in giving Jean-Claude Duvalier a Diplomatic passport?

We are also told that he gave a Diplomatic passport to Aristide and possible Cedras.

A close Preval associate suggests that this is a plot, on Preval’s part, to confuse the situation. With things unstable, he will press for Celestin’s move into the presidency.

The game has only started…..and it is a new game with totally different dynamics.

Jean Claude Duvalier was greeted, at the airport, by a large, excited, friendly mob of people….a mob that gathered almost instantly when the rumor went out that Duvalier was flying in on Air France.  It was a spontaneous gathering, from the area adjacent to the airport. One thing that was apparent, there were no antagonistic, anti-Duvalier voices among the crowd that gathered and struggled to touch the ex-President.

Duvalier then traveled to the Hotel Caraibe with a substantial security element, provided by President Preval.

The scene at the Caraibe was identical to the one at the airport. People, from the surrounding area, swarmed to the hotel in an effort to see Duvalier. Several thousand packed the road in front of the building.  This was another spontaneous mob from the surrounding district. There were no anti-Duvalier voices in this gathering. A few waved photos of Aristide and chanted for Duvalier/Aristide.

Someone has suggested that General Raoul Cedras might be the next to return.

Others have suggested that Aristide will be here Wednesday.

There are suggestions that Martelly has paid a lot of money to put young people on the streets to embarrass Duvalier.

This is an exciting and pivotal moment in Haitian history.

Things are in a fluid condition and the end results are unpredictable….

The next few days will be very interesting as Duvalier tours the countryside.