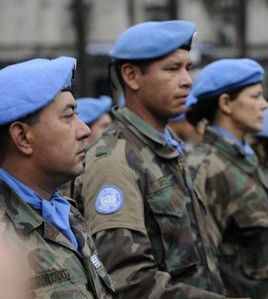 Uruguayan marines returned to Uruguay to stand trial for the alleged abuse of an 18-year-old man while on the UN peacekeeping mission in Haiti. They arrived Friday at Carrasco Airport and then taken to an undisclosed location.

The case caused great commotion in Haiti and Uruguay after a video emerged showing laughing Uruguayan marines pinning the Haitian face down on a mattress and apparently assaulting him sexually. The video shot by a cell-phone, camera shocked the earthquake-ravaged nation.

The five marines arrived in Montevideo by plane and are expected to stand trial soon. Three investigations are on course: navy, defence ministry and criminal.

Haitian President Michel Martelly condemned the alleged rape as it threatened the image of UN peacekeepers in Haiti. Since the incident, Uruguay’s government has apologized to the people and authorities in Haiti and announced that it will try to find the means to compensate the young Haitian who was subjected to “horrific acts.

However primary independent investigations in Haiti following the claim of the alleged sexual abuse coincide in that there was “gross misconduct” of the involved, but no crime was committed.

“Based on the evidence from the (cellular phone) video the possible intention of sexual abuse is discarded since the local ‘victim’ remains dressed and one of the marines although shirtless does have his camouflage shorts on with no exposure of his intimate parts” reads the UN report.

However the marines are guilty of “misconduct” for having been involved in actions which are not in accordance with the UN mission’s instructions and for allowing civilians into a military compound.

In related news the head of the United Nations mission in Haiti is urging the international community to step up its funding and development activities there, saying the country’s stability is threatened by political tension and socio-economic problems.

Mariano Fernandez spoke Friday as he presented a report on Haiti to the UN Security Council. In his remarks, Fernandez said only about 38% of the funds promised for the 2010 to 2011 period have been provided so far.

Fernandez said the situation in Haiti continues to be fragile and that any setbacks could lead to a new crisis. He said its future stability and prosperity will continue to depend on the political will of its leaders and citizens and the support of the international community.

Fernandez noted that President Michel Martelly has not been able to win parliamentary approval for his choices for prime minister. Fernandez also voiced concern about rising crime in the Caribbean nation.

On a separate topic, Fernandez said the number of uniformed personnel involved in peacekeeping operations could now be reduced by about 2,750. The number of peacekeepers grew to about 12,000 following Haiti’s deadly earthquake in January 2010. U.N. Secretary-General Ban Ki-moon wants the U.N. mission in Haiti extended until October of next year.

More outrageous facts are coming out as investigations proceed with the case of an 18 year old Haitian boy, raped by Uruguayan sailors on duty with MINUSTAH, based in Port-Salut.

After the first criminal raped the Haitian boy he went and had a shower, while his friends kept the victim pinned to the mattress. He then came back and took his cell phone to video tape a second sailor as he raped the boy.

In all, 5 Uruguayans were involved.

They should be shot!

Ban Ki-Moon says the MINUSTAH force should be reduced by 15%. This could be done by throwing the Uruguayan contingent out and make sure their military is not involved anywhere else in the world with UN operations.