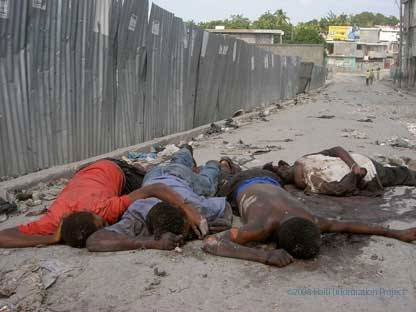 PORT-AU-PRINCE, HAITI — Early one morning this month, in the buzz saw that is downtown Port-au-Prince, three men approached a police checkpoint, firing automatic weapons. When the shooting finally stopped, a seven-year veteran of the Haitian National Police force lay dead, his body riddled with bullets.

Police say the killers were dispatched by a gang leader named Ti Wilson, a menacing underworld force believed to control a kidnapping and robbery empire, who has taken to calling himself “Obama,” presumably as a symbol of power. What was particularly unnerving about this killing is that Wilson would be behind bars now, if not for the Jan. 12 earthquake that shattered Port-au-Prince.

On that afternoon, while tens of thousands of Haitians were being crushed to death, Wilson and more than 4,500 other inmates slipped out of a wing of the National Penitentiary known as the “Titanic.” Since then, Haitian and international police say, the most notorious of the escapees have begun terrorizing neighborhoods, stolen aid supplies and fought ever more pitched battles among themselves that threaten the stability of a fragile society still far from recovering from one of the worst disasters in recent memory.

As the gangs have gained confidence, their turf wars have suddenly spiked, filling the same city morgue that swelled with quake victims with gunshot victims: at least 50 in the past few weeks. After escaping, for instance, Wilson knocked off his main rival, a gangster known as Billy, who had taken over the imprisoned gang leader’s kidnapping trade in the Fort Touron neighborhood, police say.

Gangs have charged into settlement camps slashing machetes to swipe food and water delivered by aid groups, stolen money from sidewalk vendors and gunned down passersby to steal as little as a few hundred Haitian gourdes, the nation’s currency, police say. Officials say the spike in violence is particularly demoralizing because Haiti had made great strides to bring the gang problem under control prior to the earthquake.

In a series of heavily militarized offensives that peaked three years ago, U.N. police fought gunbattles block by block in neighborhoods controlled by gangs, such as the Cité Soleil slum, Boston and Martissant. The campaign crippled most of the major gangs and led to the arrest of the country’s most notorious gang leaders, all of whom were sent to the National Penitentiary. Police say the kidnapping and homicide rates plummeted, but now those same gang leaders are being blamed for a resurgence of crime.

“It’s like we’ve turned back the clock,” Mario Andresol, Haiti’s national police chief, said in an interview under the large, yellow-and-white striped, open-sided tent that now serves as his office. “I get frustrated. We spent four years getting them, and now they are on the run.”

Another escapee, Ti Wil, is suspected of killing the French consul in the northern city of Cap-Haitien several years ago. (“Ti,” which thymes with “wee,” is a common Haitian nickname that means “little.”)

The escapees also included Ti Blan, a charismatic gang leader from Cité Soleil, who was so brazen before his arrest that he frequently escorted foreign reporters on tours of his neighborhood. A person identifying himself as Blan called into a radio program recently, urging police not to arrest him because he had become a devout Christian while in prison.

Joseph DuPont, second-in-command of the Haitian National Police’s downtown Port-au-Prince division, chuckled at Blan’s plea. “Even in Haiti, being a Christian doesn’t put you above the law,” DuPont said.

The circumstances of the mass prison break remain clouded in controversy. Some exterior walls were damaged by the quake, but Andresol said that interior walls held firm. He is certain that some of the guards panicked and fled, many leaving behind their weapons, which the prisoners took. A small U.N. contingent, stationed outside the prison, also fled, Andresol said.

Even so, he said, there is almost no way prisoners could have escaped without help from authorities. One week after the quake, the warden, Olmaille Bien-Aimé, disappeared and hasn’t been seen since, Andresol said.

This situation makes the escape very suspicious,” said Andresol, a muscly 49-year-old former Haitian army officer who trained at the School of the Americas in Georgia.

After the quake, Andresol created a special undercover team to hunt down the escapees, some of whom are suspected of scattering to small villages far from the capital. Most of those captured so far have been minor criminals. The big killers remain on the loose, and they are well armed — police say they’re often out-gunned by gang members wielding assault rifles.

There are indications that some former rivals are joining forces, creating new mega-gangs, Andresol said, and there are concerns that political parties might be using gangs to spread unease prior to hoped-for elections this winter.

Newly captured suspects are jammed into a 20-foot-by-10-foot impromptu cell outside a downtown police office. Inmates stand with their arms dangling out the bars and paw at people passing on the sidewalk. One recent afternoon, two Haitian National Police officers chugged bottle of Prestige, a beloved local beer, while standing guard.

Earlier that day, a funeral was held at the Ebenezer Church of God in Port-au-Prince for Theophile Delva, a deacon and father of nine. Delva was shot once in the leg and twice in the chest by thugs intent on robbing him as he was leaving a religious radio station in the Martissant neighborhood where he worked.

“His death is a result of the earthquake,” pastor Lochard Remy told the mourners, expressing a sentiment felt by many here.

DuPont’s men consider Wilson one of their biggest targets. But they don’t even have a photograph him — countless records were destroyed in a fire, presumably set by inmates, during the prison escape at the National Penitentiary.

DuPont’s officers have chased Wilson from one neighborhood in the city to another, each time coming up empty. He is believed to sleep in a different hideout every night, DuPont said.

Just then, as DuPont spoke, the radio crackled. A scratchy but loud voice came through the speaker. The officer on the other line had news to deliver: He wanted to talk “about Obama.”

We must again point out exactly how and why the prisoners from the National Penitentiary are on the streets.

Even as the dust was still settling, from the quake of January 12,  and the screams of trapped and mutilated Haitians filled the air, a cynical Preval was in meetings with key National Police officers. They were told to spread the rumor of a killer Tsunami, generated by the quake and threatening to deliver a coup de grace to an already devastated nation. The rumor saw the area around Croix des Bouquets already flooded…

Port-au-Prince would be next.

Thousands upon thousands of people fled the downtown area, heading up the hill through Petionville, in an effort to save their lives. Many badly injured people had their injuries worsened by the rough trip to salvation.

Of course there was no Tsunami, and could never be one of the type described by Preval’s people. If a Tsunami was generated it would threaten places like Cuba, Jamaica and Miami.

The criminally cynical rumour was simply a justification for Preval’s release of all prisoners, including more than 60 major gang leaders who had operated under his direct control. Their crimes were so horrific that Preval himself could not prevent their detention when captured by honest police officers in actions forced by MINUSTAH and embassy staff.

The release was to be seen as a humanitarian move on the part of Preval. After all, he couldn’t let his Tsunami  drown 4500 prisoners.

During the Cedras period something like 450 people were in the jail.  Under Preval’s sham democracy over 4500 suffered in terrible squalor without proper food, sanitary conditions or medical care. Most were held under Preval’s “Preventative Detention” a game that allows incarceration, for any period of time, without any sort of trial or legal proceedings. There must be some sort of lesson here.

Preval’s gangs are solidifying their control so any proposed election can be derailed because of insecurity, an insecurity created by Preval himself in order to retain power.

The UN, American, Canadian, French and other embassy staffs know the truth yet have agreed to facilitate Preval’s illegal extension of his power, validating his Continuity of Corruption.

Preval did an almost identical maneuver in 1999.

“With the stroke of a pen, Haiti’s President Preval has swept aside democracy, only recently restored by a US invasion, and imposed one-man rule.”

The stupid guy is fooled by everyone.

But why is it always the American government??