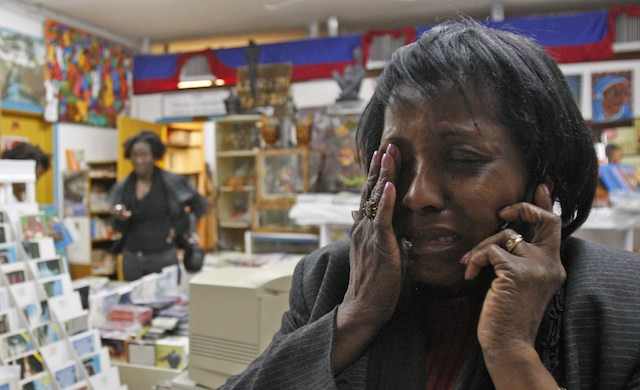 After the 2010 earthquake in Haiti where around 137000 people died , whenever the ground shakes, people remember the horror of that day and panic occurs.

Yesterday, a shallow M3.5 earthquake, gave the ground a shake, and people rushed out of buildings, windows and into the streets. It was felt in Port-au-Prince, Carrefour and other local towns affected by the M7.0 quake last year.

More than 20 people were injured during the panic. The magnitude 3.5 earthquake had its epicenter in Leogâne. This prompted many people to evacuate their offices and homes in panic. Many cases were reported that in all forms of offices including NGOs, employees jumped from balconies, fearing the worst.

A dozen students from the National Institute of Administrative Management and High International Studies (INAGHEI) were injured in their falls from a 2-storey building.

Experience report from Sarah Shaferly to Earthquake-Report.com, written a shortly after the aftershock
My first earthquake.  I was sitting at my desk when my chair started to vibrate.  I yelled for the children to run outside.  All I could hear were people yelling, dogs barking etc.  Last may 3 seconds but was pretty scarey.
Just a couple of minutes after 9am.  I live at a quest house with over 50 Haitian visitors here.  In fact they all left our main building and are now holding their meetings in our grassy fields so I’m convinced they are frightened as you can imagine.  It wasn’t that it was huge but anything frightens them something awful.

Important advise from Earthquake-Report.com
If you are living in a house or building which has been tagged to be safe, please STAY INSIDE! Most of victims of earthquakes are killed by FALLING DEBRIS. We refer to earlier articles we have written.
This advise is a generally accepted preparedness advice followed all over the world.

Important advise from Earthquake-Report.com to NGO’s and aid organizations
Please instruct your personnel, volunteers and local people working for your organizations in earthquake preparedness. Strong aftershocks are always possible and may cause further damage and injuries. You are welcome to write us if you need further advise.

According to a USAID study, an estimated 54,314 (64%) of greater Port-au-Prince‘s 84,866 buildings marked red– indicating they should be demolished—have been re-inhabited.