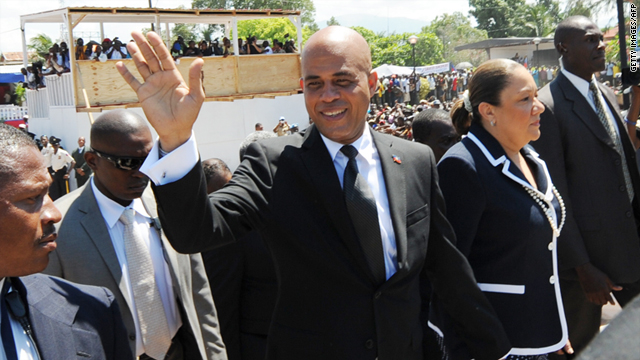 (CNN) — He had grand plans on how to rebuild his broken land, but Haitian President Michel Martelly can’t even get over the first hurdle: forming a government.

Haiti’s parliament rejected Tuesday the new president’s pick for prime minister, Daniel Rouzier, sending Martelly back to the drawing board. Meanwhile, it has been more than six months since Haitians first went to the polls to vote for new leadership after last year’s devastating earthquake.

Martelly, a former pop star, nominated Rouzier, an entrepreneur who also helped lead a Christian charity in Haiti, on May 20. Many Haitians had expressed hope the pair would be a jolt of fresh energy.

After days of hearings and required documentation, 42 members of the Assembly of Deputies voted against Rouzier’s nomination, while 19 deputies voted for him and three abstained, the Agence Haitienne de Presse news agency reported.

Those who opposed Rouzier questioned his allegiances for his appointment as honorary consul for Jamaica and alleged that the millionaire businessman — his family owns a car business in Port-au-Prince — had failed to pay proper taxes.

The latter charge made longtime observers of Haiti laugh aloud. Who in Haiti has ever been honest about that, asked Jocelyn McCalla, a Haitian-born political strategist and human rights expert.

The real problem, he said, seems to be more of a political stalemate between Martelly, who appealed to the masses for his political novice, and veteran politicians who are perhaps resentful of that.

“The legislature is flexing its muscle in anticipation of the battles to come with Martelly,” McCalla said.

And that, said McCalla, does not bode well for an impoverished nation struggling to recover from the enormous setback it suffered last year. Haiti was the most worsened nation on this year’s index of failed states released this week by the Fund for Peace in Washington.

“The process of rebuilding Haiti is essentially stalled,” McCalla said.

That process has already been painfully slow for the Haitian people. Tens of thousands of Haitians continue to live in makeshift camps; rubble still soars high on some streets — schools, hospitals, roads, houses have yet to be rebuilt.

Frustration with a lack of progress contributed to defeat for former President Rene Preval’s party. At first, Preval’s protege, Jude Celestin, was named the No. 2 vote getter in the November election.

But after charges of widespread fraud and weeks of review, Martelly won that spot and a right to face former first lady Mirlande Manigat in a March runoff.

By then, Haitians were anxious to get a new government installed and get on with the task of piecing their nation back together.

Garry Pierre-Pierre, editor and publisher of the New York-based newspaper The Haitian Times, said Preval stocked parliament with his own people. And they are likely to challenge Martelly on every move at the expense of Haiti, he said.

“How do you govern in that situation?” Pierre-Pierre asked. “There’s so many compromises you can make. I’m not sure this parliament is going to be cooperative at all.”

The U.N. mission in Haiti issued a statement Wednesday urging Haiti to pick a new prime minister quickly. Every day that passes, it said, is to the detriment of the people.

“There is no doubt that all Haitians are united in their desire to see future major projects — including those related to improving their living conditions — moving as quickly as possible,” the statement said.