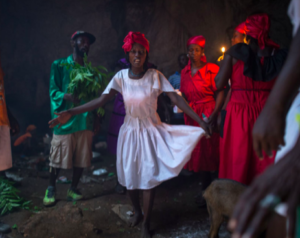 In overthrowing me you have cut down in Saint Domingue only the trunk of the tree of liberty; it will spring up again from the roots, for they are many and they are deep.
– Toussaint Louverture, leader of the Haitian Revolution (1743-1803), who died as a prisoner in France before Haitian independence in 1804.

Haitians have been faced with some of the most horrific of experiences of a recognized “failed state” during the last decades, facing coups, despotic governments, and natural disasters, including the January 2010 earthquake that killed more than 300,000 Haitians and left more than 1.6 million homeless.

One among the 49 current Least Developed Countries (LDC), as classified by the United Nations, Haiti is the only LDC in the Western Hemisphere. It is also, according to Kathie Klarreich and Linda Polman, who wrote about Haiti’s current crises for The Nation, called by critics an “NGO Republic,” a failed state and LDC that depends almost wholly on foreign aid for its survival.

This veritable occupation — and seeming permanent entrenchment — of international NGO’s, governance, and policy contingents, and a non-functioning Haitian government, has been provably ineffective, despite the vast millions in aid pledged by the international community.

It is often said that the foundation of a people is to what they will return when under stress, including crisis, subjugation and oppression. Many forget that Haiti was the first republic created and led by an African-heritage diaspora who gained independence in 1804 after having been led by a former slave, Toussaint Louverture, in a successful revolution against French rule in what was then known as Saint-Domingue. Those who fought and won this revolution came from both free blacks and slaves, inspired not just by leaders such as Louverture, but by a strong connection to he history and culture of African ancestors.

Among certain groups of Haitians, this foundation of independent men and women who honored their ancestors by gaining freedom from colonial rule is still honored in a religion that many have castigated, while ignoring its role in Haitian independence and its current relevancy among many Haitians who practice it. Its practice is not only for a sense of connection to the past, but also for comfort, strength, and self-empowerment, in asking for the help and assistance of ancestors, and especially in light of Haiti’s current crises.

Long depicted by most in popular culture in a context of horror movies (including the continued zombie phenomenon in film, from the original Bela Lugosi film White Zombie, to this year’s World War Z), voodoo dolls, or mistaking it for the Hoodoo of the United States in the Deep South (including in the new season of American Horror Story: Coven) or Santeria in Cuba and the Dominican Republic, and always depicted in generalized ceremonies thought to be bizarre with frightening rituals, Vodou has been maligned for decades by those with little direct experience of it. Often the tendency of those who are uncomfortable with what they find foreign, or with something they consider a more “primitive” avatar of the Haitian culture or diaspora, have made a point to either mitigate the influence of the religion on the culture or outright demonize it; this is true not just among the international community, but also among many Haitians themselves, leading in some cases to blame for Haiti’s crises, and even violence against those who officiate over or practice the religion.

However, Vodou has been the one constant during varying Haitian crises, representing more than 50 percent of the Haitian population. It is the one thing that remains distinctly Haitian, its influence and origin coming from West Africa and what is currently DRC (from such tribes as the Fon, Ewe, Yoruba, and Lemba) combined with traditions of the native American Taino tribe and the Catholicism practiced by French colonials.

In the interior of Haiti, miles and hours away from the coast and any major city, up in the mountains, the more rural populations face a vastly different reality than those in a more urban environment. Here, there are not the overwhelming presences of air and noise pollution, traffic, dense populations, miles of makeshift shanties, SUV’s of the UN and aid agencies with security and bullet-proof glass. White faces of Americans and Europeans are rare. The land is lush and green, livestock grazes tied to stakes to keep them from wandering, roads are rocky, uneven and unpaved, streams at times flowing across them, people gathering to wash clothing, bathe, or carry water over distances.

This is where prior to Haitian independence, much of the resistance to French rule began, and to the mountains of the north, also being the location of Bwa Kayiman, where on August 14, 1791, an historic Vodou ceremony took place during the first major slave insurrection of the Haitian Revolution.

Every summer, hundreds of Vodou practitioners, or Vodouisants, take a journey to a sacred mountain in Haiti’s interior to honor Bondyè (Creator God). Groups accompanied by the high priests (houngans) and priestesses (mambos) come to a series of caves on the mountain as sèvitè, or “servants of the spirits.” Inside the caves, Vodouisants move to different stations, each station representing a Vodou spirit (mistè or Lwa) acting as a parallel to a Catholic saint, where prayers and offerings are given, and ceremonies performed. Some sèvitè during the course of the ceremonies, are entered by Lwa, as entities that empower them through possession. Certain ritual sacrifices are performed, animals such as chickens, goats, and cattle being thought to give signs as to their willingness to participate in the sacrifice for the good of those present, with every part of the animals’ bodies used later to feed those who have accompanied it. Vodouisants also give thanks for prayers answered in the previous year, make requests for the upcoming year or attempt to reconnect with lost loved ones or ancestors (konesans), some going to various stations, others writing notes and letters or drawing symbols on pieces of paper that they place on certain walls of the caves. Practitioners are spiritually cleansed using various herbs mixed with water, rum and sometimes smoke. Candles are brought in and at times left in certain locations, illuminating the faces of Vodouisants as they pray, perform rituals and sacrifices, and give and receive blessings.

Unlike the religion depicted by popular culture, this is a deeply spiritual experience, reverent to a greater cause, inclusive of individual, family, community, and ancestors, deeply tied to nature and its rhythms, and in service to a supreme being, from whom guidance is sought through intermediaries who are closer to humanity and aware of its day-to-day realities.

For many, the soul of the original revolutionaries still exists in the ancestry and memory of these individuals in Haiti’s interior, those Vodouisants making the yearly pilgrimages to the mountain caves, and from whose ancestors, back in the 1700s, the quest for independence originally drew its first breath.

This article is a shorter version of the one which will appear in the first of the MIPJ‘s 2013 editions on Climate Change, Resource Conflict, the Environment, and Human Security, and is part of a larger media project produced by photojournalist Anthony Karen, MIPJ Executive Editor/writer K.J. Wetherholt, and documentary cinematographer Jan Wellmann.