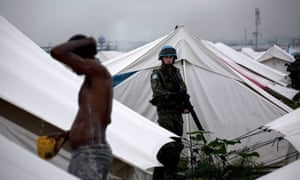 A UN soldier watches a man washing in a Haitian refugee camp. Sewage dispoal was so poor at UN military bases that it threatened to ‘damage the reputation of the mission’. Photograph: Andres Martinez Casares/EPA

The United Nations uncovered serious sanitation failures in its Haiti peacekeeping mission just a month after a deadly cholera outbreak erupted in the country, killing thousands, a leaked report has revealed.

The UN has consistently refused to accept that it is responsible for compensating victims of the disaster. But the report, which was commissioned a month into the cholera crisis in November 2010, found a series of alarming problems in several UN peacekeeping bases including sewage being dumped in the open as well as a lack of toilets and soap.

The authors of the review alerted the UN leadership that the failure to dispose of sewage safely at a time when the cholera epidemic was raging “will potentially damage the reputation of the mission”.

They also warned that the way the UN stabilisation mission in Haiti (Minustah) had managed waste disposal “and the poor oversight of contractors carrying out this work has left the mission vulnerable to allegations of disease propagation and environmental contamination”.

The existence of the internal UN review, which has been seen by the Guardian, will add to pressure on the world body to face up to the role it played as the source of the cholera epidemic. The UN is currently facing a lawsuit from 1,500 Haitians who blame the world organisation for negligently allowing peacekeepers from Nepal to carry the disease into the country, months after Haiti was devastated by an earthquake.

Until the epidemic started in October 2010, Haiti had been free of cholera for at least 150 years. Mounting evidence suggests that the Asian strain of cholera was unwittingly imported by the peacekeepers from Nepal when they were relocated to Haiti to help with emergency work in the aftermath of the earthquake.

In the lawsuit, the plaintiffs allege that the UN failed to screen peacekeepers from Nepal for cholera, where the disease is common, and that a private contractor hired by the UN failed to ensure sanitary conditions and adequate infrastructure at the UN military camp in Mirebalais. They allege that this led to sewage and other waste being pumped straight into the Meille river, a tributary of Haiti’s biggest river, the Artibonite.

Despite clear evidence, the UN continues to refuse to accept any responsibility for the disaster, claiming immunity from any claims for compensation. The former head of Minustah, Edmond Mulet, has repeatedly stated that UN peacekeepers were not responsible for the outbreak.

The UN’s controversial position looks increasingly awkward now that the world body’s own internal review exposing dire sanitation problems at its camps has come to light. In the leaked report, UN researchers led by the former chief of special support services at the department of field support, Melva Crouch, gave their immediate assessment of the state of sanitation in the peacekeeping bases in Haiti just weeks after the epidemic broke out.

In the most devastating finding, Crouch’s team found that a month after the cholera outbreak, more than one in 10 of the UN camps were still disposing of sewage – known as “black water” – “directly into local environment”. In addition, more than seven in 10 of the camps disposed of their “grey water” – that is water from showers and kitchens – into the “local environment”. 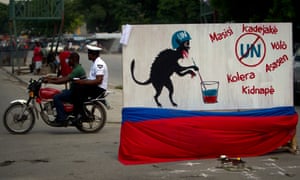 A free-standing mural in Port-au-Prince expresses Haitian anger at UN peacekeepers in 2011. The words in Creole read, from left, clockwise: Homosexual, rapists, robber, killer, kidnappers and cholera. Photograph: Ramon Espinosa/APSome camps were found to have open drains with “grey water” running right through them, while several camps flooded due to “inadequate drainage after rains”. “Most disposal sites” where private contractors were paid by the UN to take away the sewage and dirty water from the camps were found to be “too close to water sources and/or population centres and without adequate fencing”.

To add insult to injury, the leaked review, titled the Minustah Environmental Health Assessment Report, notes that the UN mission owned five self-contained waste-water treatment plants that were on site in Haiti and could have been used to make sure the peacekeepers’ camps were sanitary and safe. Two of them were found to be faulty, and as for the other three “the mission had intended to install these plants in the current financial year, however due to competing priorities none of them have yet been installed”.

A study by Médecins sans Frontières published this month in the journal Emerging Infectious Diseases found that the official count of about 9,000 deaths from Haiti’s cholera epidemic is likely to be a gross understatement. The researchers pointed out that most of the official fatalities were recorded through hospitals and medical centers, thus ignoring thousands of deaths that occurred in rural areas miles away from any formal medical provision. 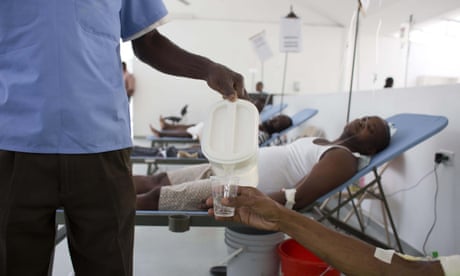 In March, the Guardian revealed that the secretary general, Ban Ki-moon, had been personally chastised by UN’s own human rights experts for the organisation’s failure to compensate Haitian victims of the cholera outbreak.

In a letter addressed to Ban, five special rapporteurs said the UN’s handling of the cholera epidemic “undermines the reputation of the United Nations, calls into question the ethical framework within which its peace-keeping forces operate, and challenges the credibility of the organization as an entity that respects human rights”.

The leaked report reveals the relatively tiny amount of money the UN could have spent to clean up its camps and prevent sewage disposal into the river. The officials estimated that an investment of just $3.15m would have covered most of the sanitation issues they had identified.

Now that cholera has taken hold in Haiti, a program to eradicate the disease is estimated to cost well over $2bn.