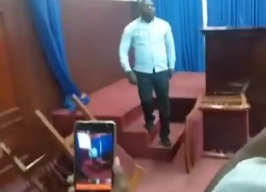 Wednesday, the Lavalas deputies paralyzed for several hours the session in National Assembly in Parliament scheduled for 11:00 am.

The deputies were categorically opposed to the idea of ​​the organization of this meeting evoking in particular the refusal of the office to look into the request for indictment formulated against the Head of State, on June 10 last https://www.haitilibre.com/en/news-27966-haiti-flash-21-deputies-demand-the-indictment-for-high-treason-of-president-moise.html

Deputy Sinal Bertrand proclaimed himself President of the National Assembly and with his colleagues they occupied the seats reserved for members of the bureau, forcing them to stay in the corridor and effectively preventing deputiues and senators from entering in the room, the session cannot be opened…

The deputies of the radical opposition have conditioned the holding of the National Assembly to the inscription on the agenda of the first plenary session which will be held after the National Assembly, of a motion of indictment of the current Head of State for crime of high treason. An indictment initiated in a correspondence by 21 deputies of the opposition on June 10th https://www.haitilibre.com/en/news-27966-haiti-flash-21-deputies-demand-the-indictment-for-high-treason-of-president-moise.html

The majority Depuies tried to reject any agreement with the opposition, but following the threats of the minority opposition and the persistent blockage, the Chamber of Deputies finally initialed via the 3 political blocs of the lower house, a commitment note which stipulates that the motion to impeach President of the Republic Jovenel Moïse will be scheduled on the agenda of the next sitting in the Chamber of Deputies.

Commitment note
The Chamber of Deputies

The Chamber of Deputies, through three political blocs, signatories of the present, undertakes to place on the agenda of the first plenary meeting which will be held after the specular national assembly of this day, the motion of putting in accusation of President Jovenel Moïse for high treason crime introduced in the Chamber of Deputies by the deputies of the opposition, in accordance with the Constitution in force.

Done at the Chamber of Deputies for days, months and years above.

Gary Bodeau, Speaker of the Lower House, made it clear that “The commitment document signed by the three block presidents does not bind the office I head.”

This session, which should begin around 11 am, finally started at around 5:00 pm, 21 senators and 67 deputies were present at the roll call, for the opening of the second ordinary session of the legislative year.

This coup of the opposition is purely political or symbolic, it must be remembered that this is only a motion and that to pronounce the indictment of the Head of State, according to the amended Constitution, the vote of 2/3 of the Chamber of Deputies is required as stipulated in Article 186 “The Chamber of Deputies, by a two-thirds majority of its members pronounces the indictment

(a) the President of the Republic for the crime of high treason or any other crime or offense committed in the exercise of his functions;
[…] ”

So it is with the Parliamentary disruptions. These actions fit the definition of Terrorism and should be dealt with as such.