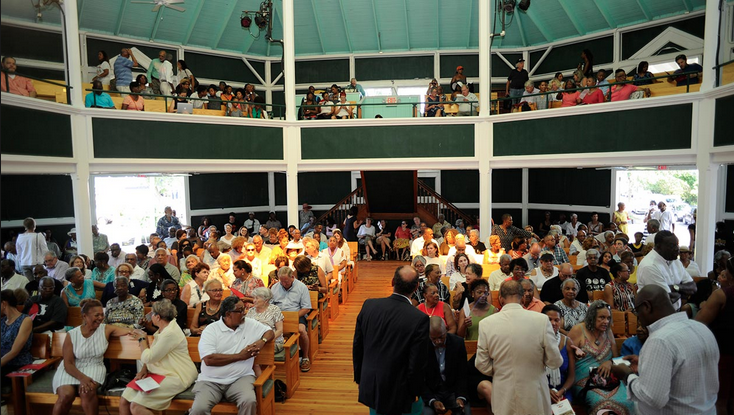 On Saturday evening fans filled Union Chapel in Oak Bluffs for Tracing Infinity’s first live performance and the release of their first album. Camp Jabberwocky was in the house, enjoying their first night of camp on the dance floor, jamming to the world premiere of original tunes.

Tracing Infinity is led by Rick Bausman and includes guitarist Brian Weiland, bassist Anthony Esposito and Mr. Bausman’s son Hudson. While not on the record, Jim Parr joined the group for the performance.

Mr. Bausman has a long history playing music on Martha’s Vineyard since his arrival in 1980.

“I came as a Camp Jabberwocky counselor, started drumming and never left,” he said.

He also created Rhythm of Life, an organization that leads community drum workshops and introduces drumming to people of all ages and abilities. The group teaches classes on the beach, in schools and in correctional facilities. 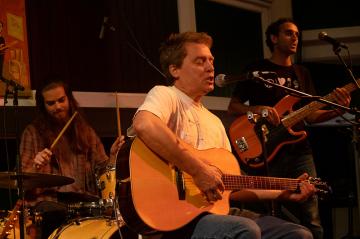 Usually at the drums, Mr. Bausman gave those duties over to his son Hudson. — Mark Alan Lovewell

“Drumming is music, community and spirit.” Mr. Bausman said before the show on Saturday. “And when I work with any group, sometimes especially groups that have a particular challenge, like maybe on the autism spectrum, or an age related difficulty or physical barriers, we can have an intensely spiritual event. Because it might not be they get to experience that kind of interaction as much as other people do.”

Sheri Thomas, a Rhythm of Life drumming student, sold CDs by the entrance to the chapel.

“Me and Rick, we’ve been friends since we met at Chilmark Chocolates,” she said. “I worked there. I call him my best bud.”

As Mr. Bausman took the stage, Ms. Thomas quietly sang happy birthday, heard only by those seated in the back rows. Mr. Bausman turned 56 on Saturday.

While Mr. Bausman and the band celebrated the release of their album, their live performance debut and a birthday, they also anticipated a departure. Two days after the show Mr. Bausman was headed to Haiti to spend a large part of the summer drumming in Haitian Vodou ceremonies across the country.

His wife, Jen Bausman, was a bit nervous. “He’s going to Haiti for a month. A week, that’s short. But a month is a long time.”

This is Mr. Bausman’s fifth trip to Haiti. He said he became interested in Cuban, West African and Haitian drumming after relocating to the Vineyard full time in 1986. 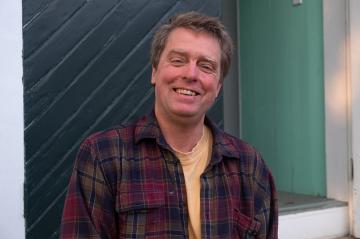 Concert was a celebration of new cd, a bon voyage party as Mr. Bausman heads to Haiti, and a birthday party: Mr. Bausman turned 56 on Saturday. — Mark Alan Lovewell

“There was a group interested in ensemble drumming just starting out on the Island. I played with them then and I still do.”

Soon he began traveling to New York city and Haiti to study Haitian Vodou ceremonial drumming. The more he studied, the more involved in the ceremonies he became.

“On previous trips to Haiti I stayed mainly in one place. For this trip I’m playing for Vodou ceremonies in 24 different locations all over the country.”

“Vodou is the ancient traditional spiritual religion brought from Africa during the slave trade,” he continued. “Drumming, singing, offerings and prayers are given to address the spirit realm, which they call Wla.”

He is still not fluent in the language but is working on it. “I’m learning a little Creole. Map aprann peti creole,” he said. “But that’s okay because I speak drum. As soon as I start to play it is a passport to the culture. I am immediately accepted, protected, respected, welcomed.”

On a trip to Haiti in April, Mr. Bausman met with Ildérice Nerat, Haiti’s minister of Vodou for the southern region. Together, they planned the itinerary.

“He pointed out on a map all the places he wanted us to go, all over the countryside. And that’s where we’re going,” said Mr. Bausman.

Mr. Bausman will be traveling with his friend, Sam, a native of Haiti. “Sam speaks a little English . . .  In January I said to Sam, I have this crazy idea. Let’s talk to Nerat. Maybe we can drum in some places and I can come for a while. Sam said, ‘I like your crazy idea.’”

Mr. Bausman said he plans to enjoy every bit of the music and community, to the best of his ability.

“At a Vodou ceremony there’s a lot of goat. I don’t really like goat, but I’m going to have it every day. We’ll make it work!”